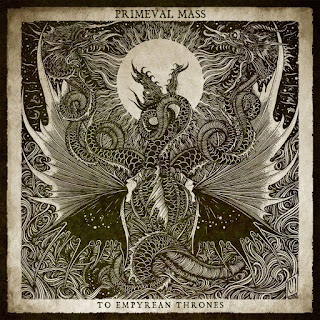 1. In Fiery Ascent
2. For Astral Triumphs
3. Their Eyes of the Abyss
4. Behind the Watching Shadows
5. With the Emblem of the Blackwinged
6. The Grand Ordeal
7. Hour of the Stellarnaut
8. The Mansions of Night

To Empyrean Thrones is the third full length album by Greek one man band, Primeval Mass.  Lead by mastermind Orth this new album takes us on a raging and bulldozing ride across the shadows and the mystical realms of black metal. While other bands are experimenting and going in omnidirectional ways these days, Primeval Mass stays true to its primitive form of chaotic black metal.  Orth sure conjures his dark and destructive emotions to create one big melodic and aggressive piece of musical art.

To Empyrean Thrones is full of malevolent speed and power.  You may need to calm your heart rate at times during a listen. No worries because there quite a few tempo changes throughout the album where one can rest from the brutality but only for a second.  To sum up the album rather than going through all the tracks I will say that there are hard hitting drums, an array of cold vibrating melodics as well as a few acoustic strums, and lots of carnage!  For Astral Triumphs was the first track that stole my soul with its extreme sound and pulsating melodic strums.  It's sure to steal yours too.  I also enjoy the extreme vox style of Orth.  It's been a while since I've heard that type of extreme vox but it puts forward the message conveyed in the lyrics.  Everything in a perfect ensemble!  Just listen to the music and be glorified with its dark creativity.

I've listened to this album about four times to fully soak in what was going on within the music.  It is sure a complex writing under all the stormy and thundering chaos created by the mind of Orth.   Each song I believe has its own distinct sound and meaning, however, it might take quite a few listens to engulf it. Favorite tracks include For Astral Triumphs, Behind Watching Shadows, The Grand Ordeal, The Mansions Of Night for their utmost creativity, however, lets not take away from the rest of the album.  To Empyrean Thrones as a whole is a very solid album.  Orth did a great job expressing his dark musical talents to makes our heads bang and ears bleed from destruction!