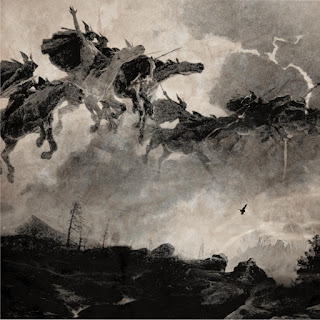 Hailing from the Netherlands comes the band Cultus.  Cultus hasn't put anything out in the last 8 years, however, the band suggests this is not a new album but instead a re-worked and apparition of the "A Seat in Valhalla" album which sold about 3000 copies.  For those unfamiliar with the band, Cultus brings unto us hateful black metal with touches of pagan influenced theme melodics.  Band member A. is also known from such bands as Pest (Ger), Countess (NL), Blackdeath (Rus), and Lugubre (NL) to name a few.  Now he along with F. unleash their blackened Pagan fury within and bring to us Gezeteld in zegeruïnen which is pretty much a strong release in itself.

Gezeteld in zegeruïnen brings forth seven glorious and wondrous tracks of black metal filled with hatred and Pagan fury.  One of the key points on this album that makes the music stand out are the consistent vibrations of the melodic guitars.  The music is pretty dark and stellar yet they find themselves flourish into melancholic beauty as well. A. and F. surely know what they are doing to keep the listener glued and they do just that with their high end talent.  You can certainly feel the raw power and energy within the tracks coming from A. and F.  Words cannot simply describe the sound being played.  One has to hear it to fully understand the value of each individual track as they have a mind of their own shining and dimming into the abyss in a good way. Tracks such as I, IV, VI are certainly my three favored tracks with no discredit to the other tracks of course.  They just suck me into a void of misanthropic and hate with the music creativity.  Those melodics are killer as well!

As I have stated before it is that aggressive power, speed, and wondrous melodics that make this Gezeteld in zegeruïnen a solid album.  A. and F. sure know how to use their talent to capture ones mind with their dark creativity.  Fans of Pagan black metal or rather any fan of extreme metal should check this album out.  Chances are you will enjoy it as much as I have. Released on February 10, 2016 by the label Heiden's Hart, this is sure to be a popular release within the metal community. Don't miss your chance to listen now on the bandcamp page!

Email ThisBlogThis!Share to TwitterShare to FacebookShare to Pinterest
Labels: Cultus