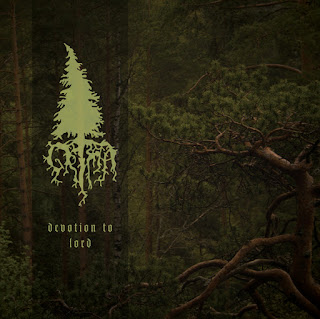 1. Ancient Will Come
2. The Beginning
3. Open The Gates Will Return The Only Cold
4. In Dreams
5. Devotion to Lord
6. The Woods
7. Blood on the Snow

Naturmacht Productions presents to us with the atmospheric and melodic Siberian black metal band, Grima.  Devotion to Lord is the bands debut album and it's already getting well known criticism from the underground music fanatics.  One can certainly feel the bands desire to create the music and entwine it with many atmospheric and experimental elements.  You can sense the anguish, the solitude, hatred, as well as the emptiness and depravity into the grey light in the tracks they have created.

Devotion to Lord certainly is a power and emotional debut for Siberian duo. It has a primitive vibe yet they twist and turn it with experimental touches and beautiful, melancholic atmosphere. Is it anything new?  Not really but let us not take away from the band as the duo surely have talent and can be top contenders in the genre. The distorted guitars are aggressive and melodic displaying raw power as well as dreary vibes of sadness.  The acoustic strums swing in the music at perfect intervals creating even a deeper meaning to the tracks. The vocals are on point with the music. They differentiate from whispers, death grunts, powerful blackened shrieks, and to awe-ing and beautiful dreamy clean vox on some tracks. Open The Gates Will Return The Only Cold is a perfect track that demonstrates the various vox vibes celestially.   The drums are bombastic and carry the flow of the music destructively but also calming and tempo changing in the more somber moments of the music. The atmosphere is surely the heart of Devotion to Lord.  Tracks like The Woods, In Dreams and Devotion to Lord is where the band displays some more somber yet beautiful auras with the atmosphere.

In summation, Grima have the perfect ingredients and talent to create some of the most powerful yet depraved music out there.  Devotion to Lord is only the beginning I am sure,  Already though, the band has made a good impression with the release of this debut.  Where does the band go from here and will they be able to top of this powerful and inspired dark creation?  Surely I think they can but they might have to try just a little harder.  Of course no disrespect to the band.  They have done a wonderful job thus far.  Check them out on the bandcamp page!

Email ThisBlogThis!Share to TwitterShare to FacebookShare to Pinterest
Labels: Grima