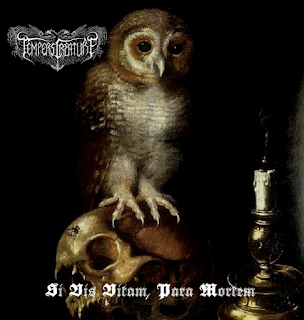 The duo team of Aurgelmir and Náttfari are back and have engraced us with yet another blasphemic and bizarre piece of musical art from their darkest creations. As a fan of the previous album, Lupust Est Homo Homini, I had many emotions on how the band would change its sound, if any.  After listening to Si Vis Vitam, Para Mortem about three to four times, I was once again proud of the work the duo did.  There are a few different and dark experimental sounds than the previous but not too much as the band stays to their traditional atmospheric depressive black, pagan/folk roots.

Let's start out with the power of the vox.  They variate from kinda dark deathy at times to black metal screams and clean vox but the band mostly incorporates screaming black vox which are very emotional and suicidal throughout the album.  Sometimes I'm just like, wow.  What I really like that kinda differentiates from the previous are the various tempo changes throughout.  There seem to be more than ever. Náttfari is an excellent drummer from what I can tell.  His bombastic blasts and hits are right on with the music, whether in calmness with the oceans or summoning a tempest full of destruction with his talent.  The atmosphere is right on in this album. Eerie piano parts and more. I also sense hints of dark romanticism at times as well but mostly on Deiner Heimat größter Sohn, Tränen auf nackter Haut and the title track Si Vis Vitam, Para Mortem does it stand out.   There are a few bizarre and avantgarde elements throughout which will catch the listener from time to time.  Take Danse Macabre which is a track I didn't expect but the band pulled off well. Very catchy, kinda folky, and a bizarre edition of the Twilight Zone. I find myself humming this from time to time.  The guitars throughout the album are of good magnitude as well,  They vary from melancholic strums to more aggressive and hateful melodies but the band manages well to compensate the two to create an awesome flow of depraved madness.  Tränen auf nackter Haut and Dämmerung der Abendsonn' are two perfect example of this concept but really all the tracks do themselves justice in their own way. You'll also hear interludes and some neofolk tracks in which they bring back Hvita from the previous album.  She does vocals on the tracks Ein Wintertraum and Und die Freud' kehrte wieder... Her vocals fit depressingly perfect with the music.  Depending what you are looking forward too, which there is a lot, there is sure something for everyone on this album.

Overall, Tempers Creature have seem to outdone themselves once again and at a great cost.  Si Vis Vitam, Para Mortem surely has many ingredients in hopes of capturing the ear of the listener.  I really can't compare this to the previous album.  It has many elements and sounds that the previous kind of didn't.  I will say they are both unique in their own way.  Fans of primitive, depressive, pagan black, this is your calling.  Listen and listen well.  Cheers to the band for another excellent job. Where will they go from here?  One can surely speculate.