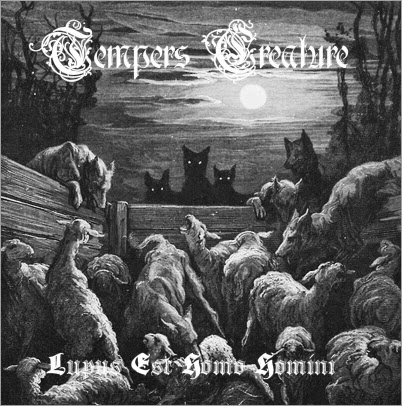 Where do I start with this one? hmmm. I apologized as I am still soaking in the craziness and madness that this duo have put out.  This is my first experience with the sounds of Tempers Creature and well I am not sure why I did not know of their existence till now.  I am glad the band reached out to me or I would of missed out on this astounding piece of dark musicianship.  It surely took several listens to finally digest all the various elements that the band incorporated.  The end result, a mournful yet epic piece of music in Lupus Est Homo Homini.

The band opens up nicely with its DSBM sound.  An ever flowing glow of grey energy just waiting to be traveled to the soul.  Excellent melancholic riffs, blasting percussions, killer vox, and a few other surprises that will probably throw some off guard.  The first part of the album is just beautiful within the realm of the DSBM sound. The guitars just harmonize with wistful vibrations all around.  The added bass in the background also is a nice addition with its dark hymn as well.  Listen to Nur ein Traum..  and you know what I am talking about.  On the second part of the album, starting from the Burzum cover of Die Liebe Nerthu, one will be caught off guard as it seems like the band changes course in sound, a more epic folk like experience for the ears.  Even clean male and female vocals are introduced which I did not expect.  The interludes throughout the album have a nice touch and give the listener a break from all the madness with their haunting and eerie piano strokes and dark atmosphere.  A lot was put into this album.  Lots of twists and turns but in the end the duo pull off their sound nicely displaying the ever so talent they were meant for.

Overall, the album prevails with its depraved sound. It was not what I expected for a first time listener but glad it caught me off guard. It also reminds of the primitive days of black metal. Fans of depressive black metal and pagan/folk metal are surely to adore this album.  It's a nice combination of the two in their own respect.  As I have stated, this album will require full attention and perhaps three to four listens to finally engulf all the elements.  The end result will not disappoint.  I would like to also mention that a few earlier albums are available for free download on the bands page here. I know I am taking full advantage of it.  You should too!