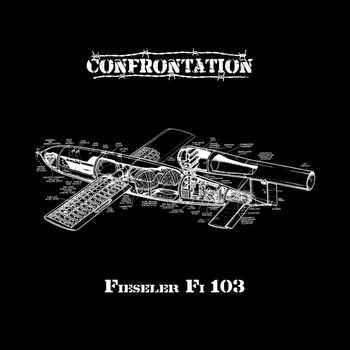 World War II has always been an interesting topic of mine for a while.  One day I was interested in the Reichenberg aka a manned V-1 flying bomb where the pilot was likely to get killed in the process or at luck, land on the attack site while in parachute.  As I was learning more about these manned devices I came upon a doom/death band hailing from the Netherlands.  Isn't that a coincidence?  This two man band consisting of Sven Post (drum, bass, guitar) and Roy Grimreaper (vox) surely got my attention in a matter of seconds. Upon listening to the this EP it resembled exactly as if one was at the cockpit of the Reichenberg. Destruction, Intensity, and Suicide!  Confrontation against enemy lines!

The dark and intense sounds of the band bring back that primitive death doom sound.  A killer melody of heavy riffs throughout will have your head banding to and fro. At the start of the first track you will know what I mean especially with its touch of groove. Back, forth, back, forth. Whiplash! P.1000 Ratte is an intense piece of music.  It will certainly have your mind in its grasp in a warlike battlefield against the enemy lines.  It's a nice build up to the dark and chaotic times of the war.  Surely a favorite of mine.  Top Notch sound in my opinion. Confront Exhaustion ends the album with its dark and heavy sound to the end.  This beast blasts you with its deathy build up and then comes crashing down with intensity all around. Another good track, damn, they were all good tracks!

Overall, I believe this EP was a success and would surely like to hear more future rattlings from the band. As I have stated before. its intense and aggressive sound will consume you.  It's been a while since I have been able to enjoy something like this.  Confrontation are sure to gain fans with this EP. I know it did with me.  By the way the EP is available for free on the bandcamp page!  Go listen to it now!  Recommended for doom death fans and for those into the war.  And just to throw it out there, the band simply states that they are not political extremists and are only interested in the history of WWII.

Email ThisBlogThis!Share to TwitterShare to FacebookShare to Pinterest
Labels: Confrontation