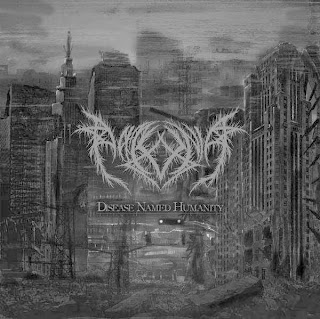 First things first.  If you were a fan of the demo the band released then be prepared to be blown away into filthy human dust yet again with the debut full length album Disease Named Humanity! Really though this Serbian black/death band has stepped it up a notch with bombastic and elusive arrangements since the demo.  They continue in the vein of the old school black/death scene.

Over 40+ minutes of brutal arrangements within 7 tracks is what you get within Disease Named Humanity.  From the beginning to end this band will consume you with its old school carnivorous biting sound.  A lot of unexpected elements will surprise you throughout the album.  If you were a fan of the demo be prepared for some unpredictable canorous elements in the sound of Paimonia.  The guitars shred your ears with unmerciful melodies as well as other euphonic melodies that will give you a slight chill in the spine.  Paimonia prove their music can be barbarous yet slightly cunning (acoustics) at times but a malicious cunning that is.  The vocals are of high caliber coinciding perfectly with the black/death sound.  A times one can be reminded of Dissection and that's with both sound and melody.  The addition of atmospheric elements like on Depth Within Nothingness Called is a nice addition as well. One surely does not expect that but like I said, it's a nice touch to the already established sound they create.  The rhapsodic and boulder dashing drums are deadlier than ever with an ever flow of manifold arrangements ranging from a mid pace beat but mostly hard pounding drums and blast beats throughout the album.  Resurgence of Malice displays an array of tempo changes for example and the drums exemplify their stellar sound on it.  Other tracks such as Contagion through Aeon, Ruined for Catharsis, and Opus VII are some of the tracks one does not want to miss for those who are new.  Check them out if you can.

Paimonia is surely a great band with tremendous talent and this proves it.  As being a fan of the old school black/death sound I was impressed with this than the more popular modern bands out there who create the same sound.  One thing is for sure, Disease Named Humanity surely is a great album and a good start for the band.  I really hope they continue to branch out with this sound and try to make it their own in the future.  Fans and new comers to the band, this band will not disappoint.  If you're looking for something brutal amongst the black/death sound then Paimonia is one of the bands to keep an eye out for.  It's some pretty hard hitting stuff.  Cheers!

Email ThisBlogThis!Share to TwitterShare to FacebookShare to Pinterest
Labels: Paimonia