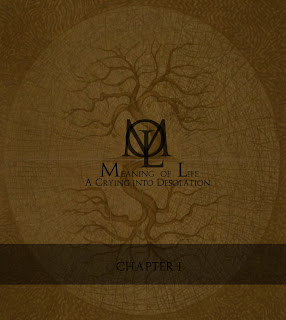 Meaning of Life combines a subtle mix of dreamy and eerie soundscapes and entangle it in a black metal landscape.  Sure one would probably say, "what?  another post black metal band? after it's been bombarded with generic music these days."  The truth is Meaning of Life sure has the talent to compete with those in top of the genre.

Eight haunting and blasphemic tracks of somber black metal infused with atmospheric post rock and a touch of ambiance is what the story tells on this album.  It's a perfect soundtrack for rainy days, stargazing, smoking a cigarette, and to clear your mind of the worries throughout the days and nights of hardship or whatever it may be.  Some tracks have a soft touch while others are guitar overdriven with strums of melancholic post black melodies and experimental sounds.  All vocals are blackened, no clean or female vox. I will say that the harsh vox goes great with the music and they appear here and there, more like an instrument and they are really not the focal point than anything.  Tracks like Broken Heart, Ashes, A Crying into Desolation are probably some of the more bold tracks in my opinion.  They are sure to touch you in some way or manner.

In summation, I have to say the sound that the band is trying to produce is a good one.  One can certainly feel the power and strong emotions with what the band unleashes upon the maasses. The band name itself, Meaning of Life, describes the overall sound of the band.  Listen and you will understand.  You will driven into many emotions and the music will lead you to a finale of a grey outcome. Listen and listen well.

Email ThisBlogThis!Share to TwitterShare to FacebookShare to Pinterest
Labels: Meaning of Life