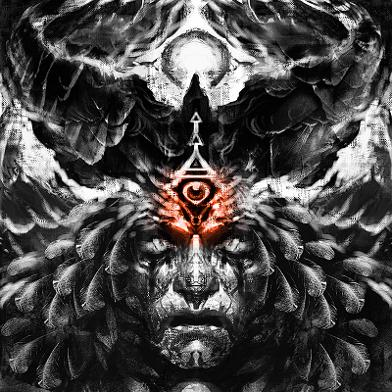 1. Brothers in the Stars
2. Black Hole in Human Form
3. My Hands were Made to Hold the Wind
4. The Birth of Tragedy
5. Individuation
6. A Nest of Ravens in the Throat of Time

---A Morbid Manifestation of Emotions---

Obsidian Tongue is a band that I wasn't aware about until it was sent to me as promo from the staff of Hypnotic Dirge Records.  Hell, I am glad they sent it because in the end, it was a great album to listen to.  Hailing from Massachusetts, the band started as a one man by Brendan Hayter (Blood of the Gods, Thrawsunblat, and ex Woods of Ypres).  Later in 2009, the sampled drums were replaced by a real drummer in Greg Murphy(Blood of the Gods, The Deadstation).  While I can't speak for the 2010 or debut album, I can certainly say that this new album slays. This album has been playing more so than anything I have really heard this year thus far.

Fans of Alda, Agalloch, Wolves in the Throne Room take note.  Obsidian Tongue is surely a nice combination of these yet they broil in their own variant musicianship style into the mix.  From the first sounds of  Brothers in the Stars, be prepared to be enchanted with such beautiful yet chaotic and aggressive melancholic riffs.  Oh and the atmosphere at such high peaks especially when the clean vox comes about.  It's just majestic in its own nature. This really is a good starting track and it will sink you in with top notch musicianship.  Black Hole in Human Form, while building up somewhat slow-ish pace, glistens out into a mid tempo piece of dark art in the end. From mid range and on it will entangle you with its killer melodies and such.  While it can get a bit dull, it just blooms out just nicely to entice the ears. Nice little interlude towards the end is pretty nice. My Hands were Made to Hold the Wind is a nice change of sound ala doom-like melodies and at a nice mid tempo pulse of drumming. There are a few nice tempo changes and of course killer melodies and even some catchier moments throughout reaching out to engulf your soul with groove. The blackened vocals just go so cohesive with this doom-like track.  A job well done.

The Birth of Tragedy continues in the same wave as the previous track.  A very somber and doomy opening but only for a short while.  The tracks births out with excitement, aggression, melody, and power.  The return of clean vox is added yet for another moment which makes the track filled with more deep emotions.  The track also goes for a somber ambient, acoustic turn which was a nice surprise.  Individuation is all over the place with blast beats, aggression, melody, and so forth.  This raging beast charges through the barrens attacking everything in sight.  A nice hint of melancholic melody tames the bull but only for a few moments.  Clean vox once again dwells throughout adding more dimension to the already bleak, oppressive sound of this track.  This track actually grows out nicely from the roots and into the skies.  This is a very atmospheric and powerful track that will just have you in awe with such beauty.  Of all tracks, Individuation, is probably my favorite track right after the opener.  Wow, just wow, is I got to say. Listen to it be amazed.  And thus finally the mystic sounds of A Nest of Ravens in the Throat of Time.  You can certainly hear some soft Agalloch moments from the beginning of the track.  Of course no discredit to the band as they do the job nicely with an experimental touch of sound. oh wait, John Haughm of Agalloch makes a guest appearance on vocals for this track.  A nice added bonus! It's displays a very haunting and eerie sound of gloom. The track builds up finally from mid range and on continuing the same sound scape but with drums, a bit of more distortion and the soft blackened Agalloch-esque vocals.  This is surely a different track. Obsidian Tongue have prove that they can change their sound from time to time and still capture the imagination of the masses. A Nest of Ravens in the Throat of Time is the perfect closer.

One can wonder where does the sound goes from here?  They have displayed many sounds of black metal and hinting at some experimental moments.  The duo certainly do have the talent to keep the music churning but what will become of Obsidian Tongue looking into the future?  A Nest of Ravens in the Throat of Time is sure to capture many fans of the genre but also brush away fans as they think it's just another one of those bands trying to clone someone or something but that is not the case with Obsidian Tongue.  Sure they might share other bands ideas but they throw in their own small mix making it slighty better for the ears to mend.  People new to this band, go check them out.  Fans of the old, well, in with the new, and I am sure you will enjoy this new album as well.  Cheers!