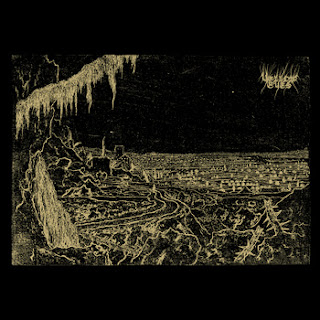 1. Light Has Fallen
2. In this Stillness
3. Many Long Fingers Bent in Pain
4. Ice Knell
5. Hammer of Night
6. Cabin Filled with Smoke and Flies

New York's finest black metal band is back with a new album!  I'd say it is about time.  This is one of the few bands from the U.S.  that I can listen to time and time again.  While being really impressed by the debut and the split with Monument, it's no consolation that the new album, Hammer Of Night continues the bands impressive musical creations of dark destruction.

Hammer of Night features six chaotic and melodic tracks of pure intense black metal. Fans of the band will not be disappointed as usual.  New fans, take a listen and be amazed at the quality of black metal being brought out by this trio.  From the start, Light Has Fallen, will have you in intense harmony with its quite chaotic but mesmerizing black metal riffing.  Dark, aggressive, pure bliss in a state of deprivation! One can't leave out the more somber and softer acoustic moments either. Just wow, and it's only the opener.  In this Stillness continues the bands reign of destruction with more dark and aggressive rhythms from the guitar which will lead you into a state of melancholy at times. Several tempo changes will take you up and down a path of slaughtered souls releasing their pain into the world within life and hate.

Ice Knell is a beast not to reckon with. Cold, endless, mind chilling riffs of pure chaos take your life force. This track is filled with some nice melodics as the path of destruction continues in to a frenzy of madness. One might need to take a breath for a moment to continue the course and thus the title track, Hammer of Night, gives you that with a nice acoustic interlude but only for a moment... Chaos! Madness! Melodic guitar riffing and bombastic drums take you by the throat and then slowly release you with a mid tempo melody of some beautiful yet somber moments.  This track is all over the place but has a really great build till the end.  Be prepared for pure black metal bliss. And thus the journey ends with the elusiveness of Cabin Filled with Smoke and Flies.  It not a taming end either.  The rage and chaos continues their path of devastation, only amplifying it a bit more high up but with a few experimental and ambient moments.  Don't discredit.  The musicianship on this track is superb even after the short experimental lude.  The melodics on this track are sure to give you the chills with it's dark randomness and more. The vocals here actually make this song.  No other style could do it.  It's a perfect combination.  Listen to it and you'll know what I mean.  Wow, just wow, and just like that it's over.

With success Yellow Eyes have pull it off again with this new album.  While I reckon this band is underrated, they deserve the recognition from the underground.  Again the musicianship is pretty chaotic but stellar at the same time.  The black metal melodies will surely suck you in a warp whole. Even the softer moments show promise as well. Hammer of Night can be ordered via Sibir Records and available in cassette format.  I believe the album will be released on vinyl too.  Those unfamiliar with Yellow Eyes, go to the band camp page and listen closely.  Be amazed of the brutality the band produces.  Surely this is still a favorite band I would like to keep an eye on.  They have potential to make it big.