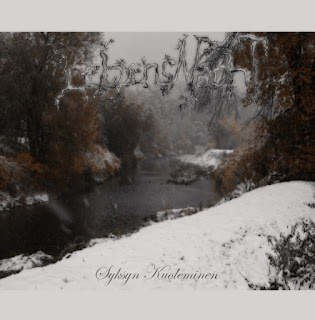 Lebensnacht is the one man black metal project of Robert Brockmann.  Lebensnacht started in 2008 as a mixture of genres but was reborn in 2011 as a black metal project.  Nature, humans, life, and death are just of the traits that influence Lebensnacht and Brockmann on this dark and everlasting journey.  The debut album, Luonnon Voima, was released around May 2013.  It was a hit amongst those in the underground community. The new album, Syksyn Kuoleminen, takes it a step further in musical direction in my opinion.  The production is much more solid and the tracks flow even better than its predecessor.  You can tell that Brockmann has surely matured on creating new and innovating hymns of destruction for us to endure.

Syksyn Kuoleminen translates to Dying of Autumn.  The theme of the album is that Autumn is dying and the only way to retaliate is either by death or winter.  And surely the music shows a way of displaying that theme and have it embedded into your mind.  Cold, chilling riffs in melancholic fashion, acoustic interludes, various tempo changes, excellent and powerful vox, probably another favorite of mine of the genre next to N. of Silent Thoughts and Shroud of Distress.  As I previously said you can tell that Brockmann has surely matured in his dark creative writing and he is sure heading into the right direction.  Fans of the predecessor do not fear because some the experimental and ambient elements can be found on this release as well. Sometimes we need a break from all the chaos ala Weiße Einsamkeit and Päättyminen with its somber and acoustic sound while being accompanied by the sounds of winter. Lebenswinter is stellar in its own fashion.  You can actually feel what is going through the mind of Brockmann as he provides cold, aggressive riffs but also explore some more oppressive moments as the music slows down for a bit.  This is a perfect combination to make an excellent track.  This is probably my favorite track.  It was done nicely. Now I'm not saying all the tracks are no good because they are.  The tracks I did mention above are probably the ones that are different from the rest of the sound but don't discredit the band for that.  I am sure everyone can relate to the other tracks one way or another. Brockmann did an awesome job for this release.

All in all, a job well done by Brockmann.  This surely has made me a new fan of the band and hopefully this release brings in a lot more.  Fans of depressive black metal, this is your calling.  The music is top notch, the production is solid for its sound, and overall, Syksyn Kuoleminen is powerful and emotional at the same time with the sounds of winter.  Looking forward to what comes next.  For more information on the release and ordering you can check out Naturmacht label.

Email ThisBlogThis!Share to TwitterShare to FacebookShare to Pinterest
Labels: Lebensnacht