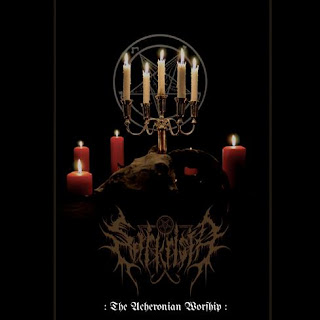 The crossroads between Hell and Earth have opened.  Emerging from the depths of the abyss the beast sends to the Earth these German servants of true Satanic black metal. These warriors are Revenant(Vocals), Farbauti(Guitars), Exesor(Drums), and Vidar(Bass). They are also know as Sarkrista.  Formed in 2011, these dark warriors have finally graced up with an opus to mend our evil ways.  The Acheronian Worship is the debut of this one of a hellish band. The cover art of the debut is not too bad really.  Of course, I am sure some will find it rather cheesy but what's that saying again?  "Never judge a book by its cover."  Also based on the track names you can tell that the music this band creates are of those influenced by blasphemy, satanism, and occultism, to name a few.

The Introduction begins this dark journey by placing our minds in a calm and somber setting with the use of atmospheric synths but only for a while as the tune carries on to Grim Satanic Vengeance. At first listen the track reminds me of some good ol' school primitive black metal.  Nice use of distorted guitars, some clean guitars too, powerful shrieking vocals, hints of atmosphere leering in the back in the vein of the introduction, and finally power all into one hellish hymn.   Funerals and Flaming Torches continues the bands hateful sound with an array of melodic guitar pickings and such. Melody varies from aggression and then some melancholic-esque moments as well.  The musicianship of the band upon listening to this track gives me the idea they are not amateurs at making music or at least know what they are doing and it is working quite well. The music will still have you entranced to that early primitive vibe of black metal from here on out.  And thus a cold winter befalls... and a ruthless one at that.  While it is not Fimbulvinter, this track will surely mend that cold and hateful black heart of yours with speed, aggression, and killer frostbite melodies.  The guitars of Farbauti on this track especially. They are all over the place and oh how they will captivate your ears with cold, awe-ing moments but still keeping that black metal lust.  At this point Ruthless Winter is a big favorite of mind from the band thus far.

Messenger of Harm and Realm of Eternal Coldness utilize again everything that the band has been known for up until this point from listening.  From the powerful vocals of Revenant, the omnidirectional dark and melodic riffing of Farbauti especially on Realm of Eternal Coldness, the bass strums which can be distinguished at minimal times by Vidar, and of course the blasphemic and unpredictable hard pounding drums of Exesor. An unstoppable force of speed, power, and melodic guitar shredding continue to cross the lands turning everything it encounters into a pyre of dark and cold hate. And after darkness has fallen, the beast awakens from the underground and behold his Wrath Incarnation! Blood be spilt across the lands, hatred embedded in the heart of men, the cold winter seasons in, and the sky darkens as black as coal.  Hymn of Wrath Incarnation complete our dark world.  Yes that is the landscape being foretold by this killer black metal track.  The lyrics themselves are mesmerizing.  Not sure why I mention them now but they definitely have a strong impact on this track along with tempo changes, of course mind bending riffs, and what not.  And finally, the ballad of Black Clouds of Revelations.  Okay, not really a black metal ballad but it starts off as one and it kind of can be heard throughout the track if you are listening carefully, well, at least to me anyway.  Wait, what am I saying?  This track is true, evil, and grim. Okay, so is that better?  I am joking.  No, but really this track certainly perceives a different mood compared to all the other tracks.  It's like a constant flow of many emotions. Moods of death, doom, somber, melancholy, emptiness all can be heard.  The end is here and now evil has taken over. You can certainly feel it on this track and what a perfect way to end this opus and on a high note I might add.

So who is this music for?  Of course for those into the true primitive black arts of metal for one or really for any fan of extreme metal generally. Yeah a lot will say that black metal in general has become rather stagnant these days but I am sure you will find something that will glue you to this band more so than all others out there and if that's not the case, listen to The Acheronian Worship again, and again, and again.  I know it took me a couple spins or so to finally consume all the talent being put forth and when I did, it was an excellent opus to have heard. Now, let's hope the band can stay atop after this and continue to create some top quality black metal from here on out.

Email ThisBlogThis!Share to TwitterShare to FacebookShare to Pinterest
Labels: Sarkrista