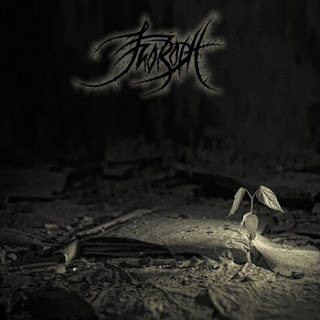 Morodh was founded in the summer of 2011 by Ragnaar (guitar) and his friends Astaroth (vocals) and Andreas (drums).  This Russian depressive black metal band since then have released two tracks that were recorded in the summer of 2012.  These two tracks were featured on a split entitled "Lost in Life" with a one man band called People are Mechanisms.  Later on, these tracks plus an instrumental were released on their first demo.

First off what I like about this band is the energy put in the music.  At times it can be powerful especially Astaroth on vocals.  You can just feel the love, hate, and solitude channeling within his vox as the guitars and drums circum the mind with depravity.  Desperation is a more traditional and aggressive track, whilst  Hopelessness turns around with a nice mellow build up of emotions but then unleashes a bleak cloud of atmosphere within the dark realm.  The music majestically transforms into a spectrum of melancholy only to end with a somber touch of ambiance.  Despite a crave of more music, the two tracks are mixed well and do justice to their purpose.

Overall, I feel that Morodh will win over some new fans with this demo, however, I did find it a bit short but hey it is a demo in the making.  I surely am interested and would like to here more from this band.  Once again the energy put forth is just mind bending.  Surely, not a band start for this Russian depressive trio.  I suggest you check out the FREE demo download on the bandcamp page.

Email ThisBlogThis!Share to TwitterShare to FacebookShare to Pinterest
Labels: Morodh