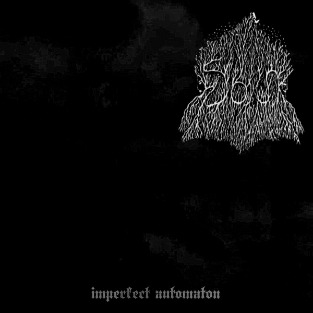 1. Atheethawarjana
2. The Gospel of Despair
3  Time to Leave

Before this EP, sometime last year or so, I was sent a short rough demo of Viragha by the band.  It was a short 3 song demo and really I didn't know if I liked it or not.  It was just kind of there. I kind of just brushed it off for some reason.  When I was sent this EP not too long ago, things were different this time around.  Unlike the short demo this EP actually stood out, but I guess since then, the band has progressed.

While Decaying Theory was mostly an avantgarde-experimental, all around project, Viragha is based on a more depressive black metal attempt with hints of eerie atmosphere and ambiance.  Imperfect Automaton is a 3 track EP with the time of 27+ minutes.  With the start Atheethawarjana, Viragha takes off insanely especially when the blackened vox and music come into play.  The energy put into this track is quite massive as you will notice when you listen.  Experimental sounds, blackned vox, and crazy guitar melodies take control making this song an experimental and incredible depressive opener.  The Gospel of Despair, the next track,  is a 19+ minute track alone.  Yes, 19+ minutes of sadistic melancholic black metal. So does it hold interest? For the most part it does.  There is a nice constant flow of mid tempo depressive black metal with some eerie atmosphere in the background for a while.  While a bit everlasting, it does build up nicely, especially with the drums changing pace back and forth and the vox fading in and out trying to change things up a bit. It's not until the 12 minute mark where things start to change with some nice yet softer guitar melodies and bass-like parts. The song eventually builds up as it goes towards the end and such. Overall, not a bad track.  Some will find it rather repetitive but despite that, it's pretty awesome.  The final track, Time To Leave, closes the EP with its catchy bleak melody and experimental black metal sound leading us to a somber ending in bliss.

Overall, Automaton Maton delivers with its unique depressive black metal sound.  Just like the other project Decaying Theory, Viragha and this EP is worthy of a listen.

Email ThisBlogThis!Share to TwitterShare to FacebookShare to Pinterest
Labels: Viragha