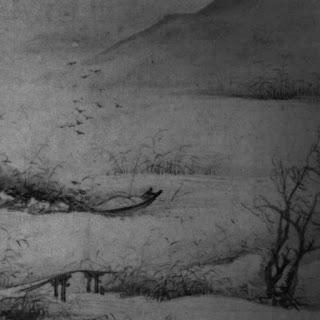 Hailing from China, Zuriaake have unveiled their latest EP entitled Winter Mirage.  This is the follow up to 2007's Afterimage of Autumn which was an amazing album in itself.  Inspired by the seasons of autumn and winter along with such emotions such as desolation and sadness, the band surely knows how to mix the right amount ingredients including a touch of their native elements to create such haunting yet beautiful black metal music. Some people even compare this band within the atmosphere region of earlier Burzum, however, they convey it with yet their own shadows and creativity.

Winter Mirage consists of two cold black metal tracks totaling to about a little more over 15 minutes.  The first track, Winter Mirage, surely shows a Burzum-esque influence, however, I think they take the power and emotional state of the music to even higher peaks. Peaks above the cold winter mountains with illustrious and dreamy atmosphere to cringe your ears.  The atmosphere is surely at its pinnacle as the sounds of bleak and pessimistic yet aggressive riffs take hold and drown you in a sea of cold depression.  A wonderful start to the EP.  It will grasp you.  Valley of Loneness brings us a more raw and traditional depressive black metal sound encompassing some experimental sounds and atmospheric synths.  It's not as dreamy as the previous track but rather takes a more dark, hateful, and depressive approach.  There are a lot of nice and negative notes in the guitars that will nurture your state of emptiness and loneliness.  The songs flows nicely through a vast barren of abstruse emotions. Yet another good track.

Overall, a job very well done by this Chinese black metal band.  Along with Be-Persecuted, Zuriaake is surely ranking high up there within the Chinese black metal realm in my opinion.  Those unfamiliar to this band I suggest you check out everything this band has put out.  You will not be disappointed.  One can only hope that another full length is in the works.  In the meantime, this EP will satisfy fans of the band but only for a short time as it tends you have you craving for more.