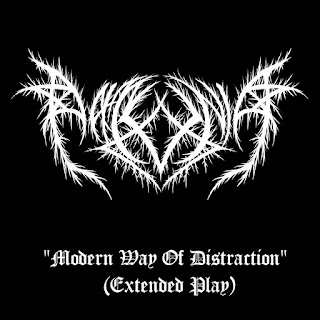 Influenced by the old school Swedish Black/Death metal scene and inspired by such bands as Lord Belial, Dissection, Vinterland, Unanimated, amongst many others, it is no wonder why this group of metal heads from Serbia are making an impression within the underground metal scene.  Modern Way of Distraction, which is the bands first 4 track EP and which was recorded back in November 2011, was recently released in April 2012 via Silent Scream Records. Paimonia are Bojan(Creator, Lead Guitars, Backing Vocals), Khargash(Bass, Vocals), Nikola(Rythmn Guitars), and Tony(Drums). Together this band can create some enthralling music and this EP shows it.

Modern Way of Distraction includes 4 bewitching tracks full of some good ol' black/death metal. Included in those tracks is a wondrous, somber acoustic outro and a nicely composed, non-irksome cover of Dissection's Frozen from The Somberlain album.  It is actually better than most who try to cover this song, in my opinion. Good job guys! From start to finish this EP is pretty striking.  From the start of the melodic and shredding guitars of Salvation Forlorn, your head will surely start to head bang, Well, at least with me it did.  You can definitely feel the massive energy that the bands puts in while writing and creating such music. The Prophet of Hypocrisy continues in the same vein, however, this track I feel is a bit more bombastic and brutal than the previous.  You can definitely here the influences of Dissection and such other bands in this track.  Ravishing guitar melodics yet again and nice show and flow of the drums make this track top notch.

Overall, a very well prepared EP by Paimonia.  Nice composure of brutality by the band. The EP runs a little under 15 minutes but it's an EP, so no complaints, however, Modern Way of Distraction will only make you covet more.  According to the band, the first writings of the full length album will begin soon.  As the band states, if you are a fan of Lord Belial and/or Dissection, then this is the band for you.  I black heartily agree. I am looking forward to what this band brings forth.  I really hope they can keep the momentum going.  Check out the links below if interested.

Email ThisBlogThis!Share to TwitterShare to FacebookShare to Pinterest
Labels: Paimonia