A Light in the Dark-From One Day to Another Review 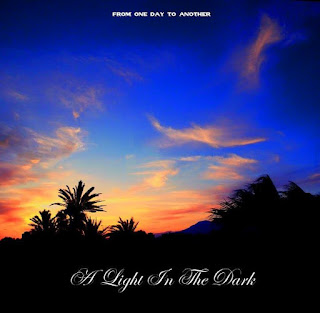 
Finally, it's here! After the impressive debut EP of Disharmony, Bogdan, the mastermind behind A Light in the Dark, has finally released the first full length of this elusive project of his.  The debut full length is entitled From One Day to Another.  Here's a quote made by Bogdan himself about the newest release.

"This release contains 7 songs, mostly instrumental. Music can be described as a mix of electronics (various effects, keyboards etc.) and some kind of rock/metal music. There is no black metal at all, but I have some plans on making a song within this style (later)."

First and foremost, this might sound like a downer to some but in dark heart reality it is absolutely NOT.  Fans of the Disharmony EP will continue to follow with the wonderous creativity of Bogdan.  In fact, it practically picks up where Disharmony left off only inducing a bit more of stellar musicianship.  I would like also like to point out that even though Bogdan stated that there is no black metal at all, the vocals are done in the black metal style as well as some guitars.  The implementation of the various effects, keyboards, and other experimental sounds are a great asset to this debut and makes it shine even more along with its already established alluring and melancholic stature.

From start to finish From One Day to Another captures the imagination with dark creations surmounted by experimental yet beautiful tones of melancholy.  Each track displays its own manifold emotion and sometimes an add of catchiness is implemented having you humming or whistling a song throughout your daily life.  All tracks also go out atmospherically to capture your imagination at some point or another.  Really though, the musicianship is top notch. In conclusion, A Light of Day is sure to capture fans and/or gain new fans. This is definitely recommended for those that are a fan of melancholic rock/metal genre.  An amazing debut. Listen and be amazed, that's all I got to say.

Facebook:A Light in the Dark

Email ThisBlogThis!Share to TwitterShare to FacebookShare to Pinterest
Labels: A Light in the Dark