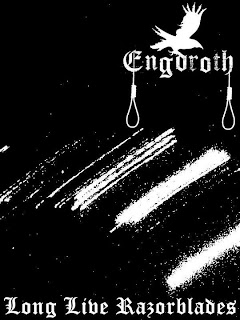 Hailing from Chile, Endgroth is a one man black metal band.  Influenced by pain, despair, and mutilation this project of Caelus Australe finally released which I believe is the first demo.  Unlike his other dark ambient project, Triangulum  Australe, Engdroth focuses on a more gloomy, depressive vibe with melancholic guitars, mellow acoustics, and some clean vocals, well at least here.

So what does Long Live Razorblades bring to the plate?  An ambient intro and and four tracks featuring bleak atmosphere and midtempo austere melodies.  While the Nirvana cover was pretty nice with its eerie atmosphere and nice clean vocals, there were times where you could hear a few musical mistakes but that not to take away from what was accomplished.  Untitled I, II, are pretty much your typical depressive melodies, however, there is something about the musicianship that just makes them level out on top.  Untitled II, for example, displays a nice array of melancholic guitars and emotion as well as embedding a few lines of catchiness and a nice solo towards the end. This track is sure to melt your dark heart.  Hell, this demo is sure worth it just for this track.  A must listen for sure.  Untitled III, almost doom like, carries on with long drawn out guitar strums encircled by depravity and emptiness in its ambiance.

Overall, Long Live Razorblades doesn't disappoint in my opinion, however, I think a bit more could of been accomplished.  No disrespect to Caelus, he did a wonderful job in creating this dark piece of art.  Perhaps we will get some black vox next time?  hehe.  Fans of the depressive genre be sure to tune in.. Even though it may be nothing new to some, Caelus does go out of his way to try and capture the listener and he does with success!

Email ThisBlogThis!Share to TwitterShare to FacebookShare to Pinterest
Labels: Engdroth