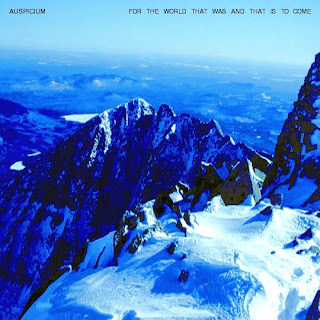 1. For All Who Seek These Waves
2  The World that is to Come
3. Judgement
4. Reclamation
5. Justice
6. A Basilica of Black Stars

For those unfamiliar with Auspicium, Auspicium is a black metal band that was created in 2004 by Patrick Hasson who is also known for his other project Black Chalice.  Hailing from Brewer, Maine this U.S. black metal band is surely becoming a favorite in the underground scene these days.  For the World that Was and That is to Come is the latest opus from Patrick Hasson and already it has seem to capture many peoples attention.  Hey, that's how I found out about this band in the first place.  Nothing but good things about this record is pretty much what I've heard.

Well, what I really like about this album is the power and aggression composed.  The first track, For All Who Seek These Waves is sure to be a favorite on this album with its raw style and melodics. It gets you in the mood for what is to come.  It's a good opener. After all that chaos, The World that is to Come comforts the listener with breathing air with its alluring atmosphere and ambiance. Nice track and beautifully done. Ya, you do encounter some experimental/post black metal elements but they are kept to a minimum, which is good because it seems more bands are heading in that new post-esque direction and it seems that it is overdone these days, well at least in my opinion. That brings us to Judgement, which by the way, quotes the late George Calin. The track starts off as a ravishing berzerker with a melodic black metal sound then makes a quick abrupt into some more softer, mellow moments with clean guitars, mid tempo, and eerie but calm clean vocals which does add a little more atmosphere as well. Reclamation picks up sort of where the previous track left off.  A nice and mellow start with clean vox and then sways into a more blackish/post sound but then converts back to the evil that it is with blast beats and what not. This track and the next track, Justice, are pretty much all over the place displaying and mixing up variant styles that have sombered within the album.  And finally, again after all that chaos we are lead into an atmospheric and soothing end in A Basilica of Black Stars. Mesmerizing,

For the most part, this record is a more raw black metal album than anything.  Power, aggression, melodics, blast beats, this is some good black metal here.  It would definitely not hurt to back track previous albums as well.  A lot of fans have said that this album was a good step for its direction and probably the best Hasson has unveiled so that leaves me curious to what was brought in the past as I heard the previous albums were more sinister.  One can only speculate.  So if your a fan of raw melodic black metal with minimum experimental styles, this album is for you.  Mind you, it might take several listens to soak everything but in the end, you will be glad you did. Props to Patrick Hasson.  Looking forward to other albums in the future.  By the way, I do believe there is an Auspicium/Earthenwomb split that was released not too long ago. You might want to look into that as well. Cheers!

Email ThisBlogThis!Share to TwitterShare to FacebookShare to Pinterest
Labels: Auspicium