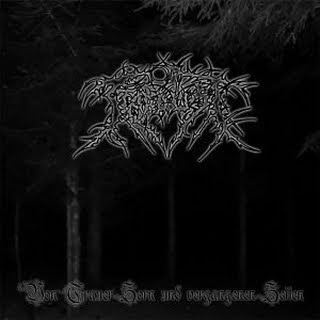 
These days it seems like depressive black metal bands from Germany have been ruling supreme and dethroning all others in terms of outstanding musicianship. So because I have noticed that statistic, I went ahead and picked a random German black metal band that I had never heard of.  Stardust, not to be confused with the heavy metal Stardust from the 80's, was hand picked.  Now, don't let the band name fool you. This band has all the talent of making an excellent record and this first demo, Von Trauer, Zorn Und Vergangenen Zeiten proves it.

Now as a depressive black metal enthusiast I was expecting similar qualities that other bands in the genre have like the ingredients it takes to make a depressive black metal record. Von Trauer, Zorn Und Vergangenen Zeiten actually caught me by surprise as it was surely refreshing to hear something different from what I am use to or rather something I am use to but at a higher level.  From the beautiful piano interludes and ambiance of Einklang - Der Wälder Wege Unbekannt to the sounds of the acoustic driven outro of Abschied - Denn Leben Ist Nur Wo Der Tod Kann Sein Stardust, this record had my attention at full. Of course in between, we have a mesh of some of the fine arts of black metal. One track that caught my attention was the raw and old school black metal sound of ... Und Donnernd Brach Die Menschensphäre.  Power, aggression, blast beats! Even with all that aggression, Stardust do show a more softer and mellow side which include piano, synths, and acoustics.  The acoustics played on the tracks are not your typical repetitive dull strums.  Stardust manages to captivate the listener with unpredictable and acoustic progression throughout. Ewigtraum and Abschied - Denn Leben Ist Nur Wo Der Tod Kann Sein Stardust, are two tracks that display that acoustic glory.   Erinnerung Eines Gebrochenen Herzens is indeed a more traditional depressive black metal track, however, the musicianship of the band surely shines on throughout and takes it to higher levels where not a lot in the genre tend to go.  Last but not least, we can't forget about the Darkthrone cover. Now, I have heard a lot of bands cover this song but really they just cover it, they don't really throw in their own ingredients to the mix.  Well, once again, Stardust manages to do that in a grimfrost, if I may, yet beautiful acoustic sound minus the vocals.  All in all, very well done.

So in the end, everything you could want in a bleak and depressive black metal record can be found on Von Trauer, Zorn Und Vergangenen Zeiten.  My only flaw was that it was a bit too short but it's ok. I plan on listening to the newer record, Des letzten Novembers Trauersang, which was released at the end of 2011. Hopefully, it is in the same tradition as this one. Depressive fans take note of this band.  If your tired of the same ol' stagnant sound, this will surely refresh your ears.  Now go listen!