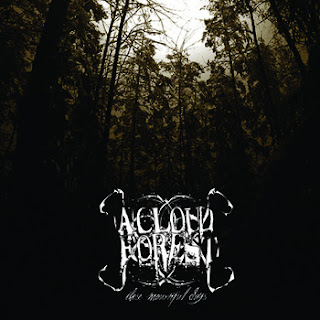 1. Lost in the Fog of Mourning
2. With One Last Breath
3. The Smile of Suffering
4. The Dark Wings of Hate
5. The Blooming of an End
6. Into the Silent Land

If there is one word to describe These Mournful Days, it would be unique. The second full length album from A Cloud Forest surely shows that it's rooted from the interior of the black heart and proves itself as a strong contender amongst others in the genre especially in the Phoenix, Arizona metal scene. I should know. I use to live there. Whilst only consisting of two members, Eric and Shelly, the duo do prove that they are strong force not to be reckoned with.  Cliche? Yeah but it is true.

These Mournful Days consists of six illustrious black metal tracks with touches of melancholy and atmosphere.  In addition, Shelly finally lends a hand with her ravishing blackened vocals and really it is a good leap forward as her vocals are perfectly entwined with the music.  She adds an ingredient that just makes the musicianship of Eric stand out even more. Another attribute that I really relish is the murky and raw production that accompanies all the tracks in the air.  Not too polished yet not to lo-fi, just commendable enough for the sound the band is aiming for.

Now onto the album. We are first introduced with the noise/ambiance track of Lost in the Fog of Mourning. Just listening to the track with its production will have you lost in the fog of mourning.  It is not until the second track, With One Last Breath where the band starts to shine on. The track brings forth clean guitars, killer atmosphere, and some sadistic yet beautiful guitar melodies from Eric especially as it grows towards the end in melancholy.  The Smile of Suffering is definitely where the vocals of Shelly show its first aggression melting perfectly with a more darker and aggressive side of guitars and melodies brought forth to us by Eric. You can definitely feel the emotion of regret and suffering on this harsher track.  And if the previous track wasn't too sinister of a track for you, the next track, The Dark Wings of Hate, exemplifies an evil energy with bombastic blast beats accompanied by a hellish and hateful black metal landscape. Again, Shelly's vocals are perfectly matched with this demon of a song. The Blooming of an End is a slight change in speed but only for a bit, almost doom like in the beginning but then mid paced throughout.  Various guitar riffs take control as Shelly embraces us with her blackened vox, in fact, this track includes clean vocals, perhaps from Shelly herself which is a nice added touch for the track especially with the nice atmosphere around it.  The track gets more inventive as it carries through after the build up. Lastly, we take a somber walk into the vast and barren lands of Into The Silent Land. This melancholic piece is the best way to put the last words into the album.  Almost post like, the track acquaints us with soothing, melodramatic atmosphere accompanied by prolific clean guitars and soft whispers, but only for a moment, until the pain and suffering of Shelly's powerful vox and Eric's distorted guitars takes control to end this opus on a high note.

To conclude, The Mournful Days displays a plethora of morose and wistful emotions bound together by aggression and exemplary production.  The Arizonian duo of Eric and Shelly, together, seem to be on the right direction with the release of this second full length.  I really do hope the duo can continue to share their passion for the genre in future releases.

For people who have not heard of the band, you can go to their official website for more information as well as for a Pro-cd(not cd-r) or to their bandcamp for a digital purchase. Support! As far as I know, a split LP with Lamentations of the Ashen is set for an early 2012 release and a split LP with Moloch(Ukraine) is set for a mid 2012 release.  I am surely looking forward for what creations A Cloud Forest comes up with next.  Cheers.

Email ThisBlogThis!Share to TwitterShare to FacebookShare to Pinterest
Labels: A Cloud Forest