Lamentations of the Ashen-EKIMMV Review 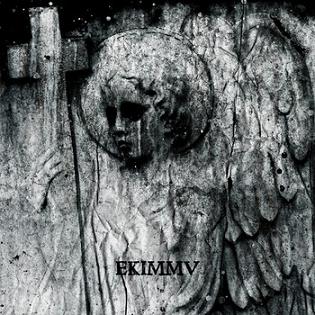 The intro...Of Wraiths In White and the second track, Eventide Sentinels Bedecked With Ineffable Twilight, acquaints us with the bands accustomed sound of depressive black metal with doomy melodies, however, one thing you might find lacking is the high-on, bleak atmosphere that was displayed through out the majority of the previous album.  We are now instead endured with a more guitar oriented, melodic, and traditional depressive black metal sound. Not to fear because some of the somber and post black atmosphere that was brought in the past is re-lived on the track, Veiled In Clairaudient Litany, which in my opinion, is the best track on the album. There can never be too much dark beauty in one song. It may leave you speechless in a time warp of aweness. Also, Bon Vincent Fry musicianship, as always, shows he likes to adventure on with his tracks and not keep them at a constant sound or tempo. Viperine Shades Linger Quiescent Among Erstwhile Passions is a track that brings aggression yet combines it with mournful melodics throughout as the song withers with the minds omnidirectional imagination.  Finally, the atmospheric landscapes of Ascent Into The Empyrean leads us out to the end of this radiant opus.

Overall, EKIMMV delivers with its mournful melodies and adventurous compositions.  Less atmosphere and more aggression is what we get on this album when comparing to the previous album. We still do encounter the beautiful clean guitars and ethereal atmosphere but it is to a minimum. For those interested, the album is on the bands bandcamp and it may be purchased via digital download as well.  Those who support depressive black metal should check this out and give it a try.

Email ThisBlogThis!Share to TwitterShare to FacebookShare to Pinterest
Labels: Lamentations of the Ashen