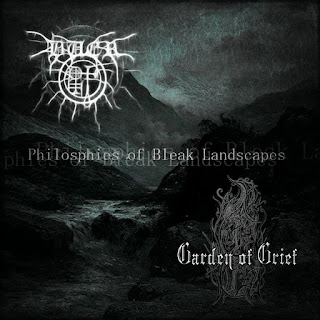 1. Garden of Grief-Distant Memories of Legends Untold
2. Buer-My Tale of a Withering World

When I heard that a new Garden of Grief split was in the works, I did not hesitate to get as much information as I could about it. Most know that I am a very huge fan of Garden of Grief led by mastermind Boronian Sturmfels. I remember hearing the Garden of Grief/Nightforest split earlier this year and liked it and then when the full length Denied Sancutary X came out, I was even more amazed. There is something unique about Sturmfels creative musicianship process that just sinks you in. He also takes to his tracks and tries to make it as good as possible by adding new parts and such. Really, there is never a dull moment when it comes to his writing.

As far as Buer, well I am not gonna lie, I have never heard of this band until recently so I really can't say much. I do know that Buer is a depressive black metal band from the U.S. Buer released various splits in 2010 and then later released a full length earlier this year. So with this said, I am going in not knowing what to expect from Buer, but if Sturmfels is confident to do a split with the band then that says that Buer do have some sort of positive talents.

Philosophies of Bleak Landscapes, released on Ashes of Paltry Souls, brings forth the best that these two bands have to offer. At first listen, I was totally speechless and awe-ed by the top notch musicianship of these bands. Really it was until the second listen that everything started to absorb and I started listening more into the overall sound after getting over the amazement the bands offered. One big surprise to me was the new Garden of Grief sound. Just when I thought Sturmfels couldn't top his older stuff, he took it to another level. On the track Distant Memories of Legends Untold, Sturmfels unleashes an epic and I mean epic sound of calming atmosphere infused with depressive black metal. This sound is an entirely massive change from his past works. While in the past he brought us a more sinister guitar oriented depressive sound with impressive melodies, this time, he does the same, however, a bit less guitar orientated and encompasses a more atmospheric, dreamy approach ala shoegazing post black metal but in his own way. This is surely a nice change of sound but don't get me wrong his works in the past were up there too. Distant Memories of Legends Untold is a track you have to listen to. There are really no words to describe this masterpiece until you take a listen.

While I have no previous listening experience with Buer, I had no idea what to expect on the next track entitled, My Tale of a Withering World. Though, after listening to the track, I thought to myself that I have been missing on some good music out there and surely Buer is another band that seems to impress, in my opinion. The good thing about this is that I really love to discover new bands and music and surely Buer, at least on this track, is another band that seems to hold my attention for the majority of its composure. Coming in with its intense persistance and aggression, this track is one imploding beast surrounded by a profusion of spectral synths and atmosphere.  Not long after, more towards the middle, the song does go mellow for a bit with its calming acoustics and enchants the ear with an abundance of morose emotions.  And just as you're enjoying the beauty of this interlude, that imploading beast returns for another round and finally ends the track. This track can be best described as an uncontrolled, nightmarish dream surrounded by beauty. A job well done.

So in the end, we get two top notch tracks, a little over 20 minutes each by two impressive bands. What more can I say?  You will have to listen for yourself to be glorified. This split is of quality to be up there in the high ranks with the rest. My only fault with this split is that it has me craving more. From here on out, I look forward to what both Garden of Grief and Buer have in store for the future and lets hope its in the similar tradition of these two alluring tracks. Fans of the atmospheric depressive genre must give this a listen. Those of the traditional DSBM style, chances are you will enjoy this too. Recommended for all ears.

Email ThisBlogThis!Share to TwitterShare to FacebookShare to Pinterest
Labels: Buer, Garden of Grief