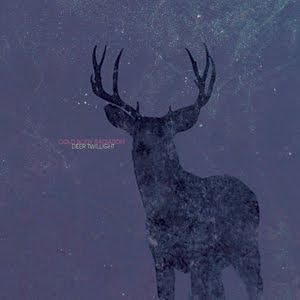 With the successful release of The Great White Emptiness last summer, it was indeed time for a new album from this one man post, shoegazing black metal band, Cold Body Radiation. While I was a big fan of The Great White Emptiness, this album was one of the most anticipating albums of the year for me.  Now did it do its justice? Was it worth the wait? Well, truthfully, yes and no but more along the yes side.  Now I understand that recently the post/black shoegazing genre is getting a bit over crowded these days but Cold Body Radiation isn't just another band out there. In fact, I think Cold Body Radiation has proved to be on top of the genre along side with Alcest and the lot, yet I am not sure why this one man band doesn't get much attention or people have no idea of its existence. Well, after listening to Deer Twillight, some could say, that it's about time the band gets noticed.

Compared to the previous album, The Great White Emptiness, Deer Twillight is a more progressive, mellower, and more mature album in my opinion.  It seems that the Cold Body Radiation sound is more persistent and not mixing it all around like the previous album.  As far as the blackened sound, well that seems to be fading a whole lot more than I expected but in return, M. concentrates on the overall musicianship, from the bass lines, guitars, and dreamy atmosphere. The Night Reveals is paragon of the musicianship with its tantalizing guitar tones, bass lines, and more.  For the most part the blackened vox found on the previous album are almost non existent this time around. Even at times we do get a glimpse of some haunting yet soothing clean vocals like on the track, Make Believe.  That track will take you on some sort of dreary journey across the stars.  There are also a few fast paced tracks, Change of Page is one that comes to mind.  Most of the songs, however, display a myriad of dreamlike tones with a melancholic touch.  Shimmer is one track that will put you in a coma of awe as it transcends with its aesthetic composure.  Really though, all the tracks will affect you in some way or another.

In summation, Deer Twillight is an awe-inspiring and breathtaking piece of musical art.  Yes, it less and less black metal and more post-ish but fans of the genre should really enjoy this.  I am sure M. is happy with the outcome. I, myself, was expecting a more aggressive album but really I have no problems with it as it's been an emotional ride of endless thoughts. I don't know how many times I've sat or laid on the roof at night time gazing at the stars in the middle of the cold bleak weather while listening to Deer Twillight.  Very satisfying.  Hopefully, it will be for you to.