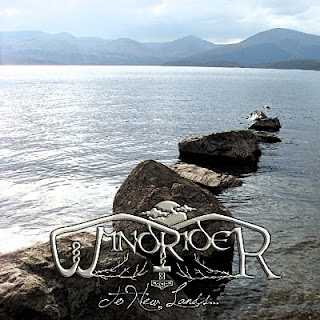 For those unfamiliar with Windrider, Windrider is a symphonic viking metal one man band formed in 2008 by Elliot Vernon from the United Kingdom. In 2009, Vernon released the epic Muspelheim EP which gained much popular attention to those in the underground scene. In October 2009, Vernon recruited some fellow band members for a live line-up for stage presence. After the success of the Muspelheim EP, Vernon started working on new music towards the end of 2009. On March 1, 2010, the first full length To New Lands... was released.

You can never judge a book by its cover so people say but the first thing that attracted me to this band was the alluring album cover and creative logo. I had no clue to what I was getting myself into but those two things caught my attention and then after listening to some samples, I was even more elated and it caught my interest furthermore. I learned that there was an EP before this album so I took it upon myself to check that out first, no idea why, but I just wanted to. I downloaded the Muspelheim EP off the myspace page as all of Windrider's music is available on there for free download. The Muspelheim EP quickly became a favorite of mine with its glorious epicness and stellar musicianship. After the EP, I had high expectations for To New Lands... and in hope of it being a continuation and it was just that.

To New Lands... brings us 7 epic tracks of beautiful, atmospheric, and symphonic viking metal. From the epic prelude of To New Lands... all the way through To New Lands...Part II be prepared to be taken on a gallant journey of folk and viking metal filled with symphonic madness. Prelude starts off majestic with an ever-flow of cinematic sound scapes, atmosphere, and some spoken passages. Epic fanfare sounds and a midtempo of symphony bring us to the best track on the album, To New Lands Part I. Part I is a track filled with an epic flow of synths mixed in with perfectly sounding harsh vocals for its sound, nor to high nor to guttural, just perfect. The musicianship of Vernon is on par on this track especially towards the end when the solo comes in. I always get the chills when listening to that solo. It's so beautiful. Only on the second track and already praised very highly by me. Folky accordions sounds bring in the next track, The King Under The Mountain. This track has a heavily viking folk with accordion influenced sound and some nice clean vocals as well as harsh. There are some pretty good synth sounds all around with its mid tempo flow and sing along chorus. We come back to the battlefield with some more epicness with the track, There is No Victory. This is a 9+ minute track filled with a constant flow of tremendous atmosphere, synths, and folk . This song has a nice sing along chorus filled with symphonics and clean vocals. This is a nice track for its length. Seven Fathers Of Iron And Stone begins with on and off crushing guitars and blast beats accompanied by some symphony in the background. Seven Fathers Of Iron And Stone then turns into a rhapsodic frenzy of sound. You can hear some dark guitar melodies here as well as darker keys. I really enjoy the tempo changes of this song, done at the right time and all. This song gets slightly darker from the middle on with some nice crystaling keys and sound, though still retaining that heroic atmosphere Windrider is known for. A nice change of sound.

The next song Mountain's Sunrise is actually an Annwn cover. For those unfamiliar with Annwn, you can check them out here. I actually checked out the the Annwn song first before listening to the Windrider's version of the song. From listening to both sounds I will say Windrider did a pretty good job. It's not bad, however, the Annwn cover still remains the better of the two but only because it's more traditional sounding, no pun intended to Vernon, he did an excellent job covering this song. Mountain's Sunrise is slightly slower and has a more mellow sound filled with a nice flow of somber clean vocals, acoustics, and flute sounds. Nice job with this cover. Now on to the grand finale with the 13+ minute track, To New Lands... Part II. Part II begins differently than expected with random guitar riffage leading into a black metal beast filled with keys. This song actually has speed. It slowly builds up epically leading us to a pretty catchy chorus done in clean vocals. The song overall is pretty well done and manages to keep the listener a hold for the whole 13+ minutes for the most part. This track is more darker, aggressive, and more extreme in sound than any on the album. This could also count as an accumulation of everything that has been done on the album into one song. All well, ends well and this is a majestic way to close up To New Lands...

Fans of Equlibrium, Falkenbach, Moonsorrow, and the sort take note because Windrider is swiftly roaring its way strongly across the lands, the sky, and oceans into the battlefield and To New Lands... has a strong chance for survival.

Email ThisBlogThis!Share to TwitterShare to FacebookShare to Pinterest
Labels: Windrider