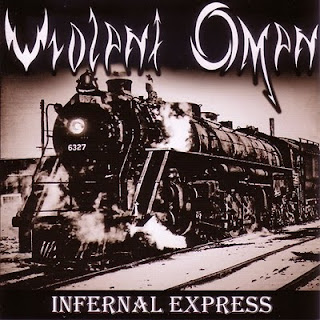 Violent Omen is a black/death thrash metal band that hails from Ukraine. They formed in 2009 and finally debuted their first album Infernal Express in 2010. First thing I noticed is the locomotive on the cover and well that pretty much sums up the album, speed, crushing riffs, and aggression. Infernal Express us brings us six rifftastic and aggressive songs followed by three other songs, a Kreator cover, a tribute to Bal-A-Myth, and a Dark Angel Cover.

Violent Omen is not like much modern bands who are coming out with a new wave of retro thrash. In the blackened thrash scene this is surely one band that will capture peoples attention. Within the tracks you will find some groove, speed, tempo changes, and awesome melodics. The vox portrayed here have that thrash traditional sound, only a bit more blackened and dirty. The musicianship is up there. The guitars shred throughout the whole album with madness and power. The bass is pretty top notch and very audible to the ear. The drums are on point with some technicality, brutality and speed. From the start of the beautiful melodic intro till the end, this surely will amaze thrash fans.

In summation, Violent Omen is definitely one of the newer thrash bands that should be recognized. Infernal Express will cause you to bang your head, mosh amongst yourself or with others with its immaculate yet raw and aggressive sound.