Wolfthorn-Echoes of a Forgotten Past EP Review 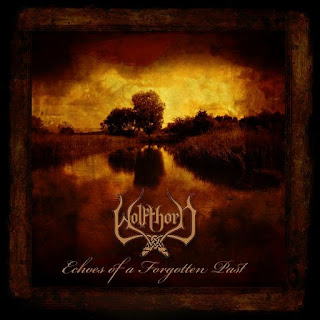 1. Sworn in Blood
2. Twilight in Valinor
3. The Mists of Avalon
4. Thousand Blades
5. Thus Spoke the Morrigan

Wolfthorn is a melodic black/folk metal band hailing from Lancaster, Northwest, UK. Wolfthorn formed in 2007 and recently released their first EP in October of 2010.

Echoes of A Forgotten Past has a lot of the various ingredients to make this a stellar Ep. Whether you are a fan of aggressive black metal or folk metal, this Ep is sure to attract both fans of the genre. Sworn in Blood displays a nice vibe of grooviness and catchiness throughout its course. Along with that, you get all the shreddage and melodic guitars of Graeme Farmer and Andy Shackicton including some killer solos as it reaches towards the end. Twilight in Valinor is a more straight forward, fast paced, aggressive track however incorporating some little atmosphere, clean guitars, and dark low vocals. The vocals of Chris Eckersjey are top notch on this track as well. Again, the melodic guitars and solos continue to impress the ear especially towards the end as it is Dissection-like.

Next comes the more epic and folkier soundscapes of the Ep with the track, The Mists of Avalon. When I say folk, I don't mean accordions, whistles, flutes, and all that wankery. The guitars are definitely what make this the best track on the Ep with folky guitar melodies, both clean and overdriven. The folky melody flows smoothly throughout especially as it grows near the end. The vocals Chris Eckersjey play another important role here varying from blackish to clean melodies. Very well done track. Thousand Blades goes back to that much more aggressive sound. While the melody is at a constant speed, it really isn't too bad. There a nice few guitar melodies here and there and this is where the drums of Tom Johnson, in my opinion, are most dominant. Thus Spoke the Morrigan ends this opus with a nice atmospheric and shredding bang. Every ingredient heard throughout the Ep and more can be found on this track. Nice atmospheric scene, shredding guitars, and even the bass strings of Rhys Hallett take control. Nice way to end the Ep.

Overall, not a bad start for the band Wolfthorn. What really caught my interests overall were the guitar riffs and melodies. They were pretty sub par. Not to say the vocals, bass, and drums weren't bad at all, they all did their justice as each instrument stood out at one time or another in the various tracks. Whether your a fan of melodic black metal or folk/black minus all the traditional instruments, then this Ep would be for you. I hope that Wolfthorn continue in this tradition and perhaps do more in the future, but for now, this is not a bad start.

Email ThisBlogThis!Share to TwitterShare to FacebookShare to Pinterest
Labels: Wolfthorn