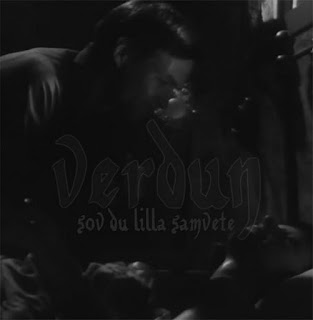 Verdun is a one man DSBM band hailing from Sweden. Out of self pity, W handles all the instruments and composure. Sov Du Lilla Samvete was released in 2011 on tape and on cd with limited copies via Self Mutilation Services.

So what does W bring forth? He brings forth 3 depressive black metal tracks, an acoustic interlude, and a Kent cover. All the songs vary in their own way sort of say. Tack För Allt, which is probably the strongest track on the album, displays a nice raw sound of depressive black metal and perhaps a hint of doom towards the end. Dark, melodic riffs take their bow as the mid tempo drums complete the sound with its noticeable strong pounds. Mitt Sinnes Leriga Åkrar leans towards a more traditional depressive black metal track with clean guitars, and a nice constant flow of dark melody. The guitars and drums at times bring out a more rhythmic, depressive, doom rock vibe which isn't bad at all and keeps the music flowing nicely. Ingenmansland is pretty much a dark yet calm acoustic interlude which is a nice added break from the emotions raging from within. ...And thus the last track, before the Kent cover, is the title track, Sov Du Lilla Samvete. Once again we are endured with dark, clean guitars, and melancholic black metal. Almost doom like, this track definitely displays a more haunting and eerie, dark sound with a hint of experimentation. It flows nicely as it takes on the journey to the end. Nice change. Finally, the Kent cover of Innan Allting Tar Slut, follows. For those who are not familiar with Kent, they are an indie post-like rock band from Sweden who made it big. While the original track of Innan Allting Tar Slut is still the best I can see why W decided to cover this. It is a very emotional song and thus his adaptation of it really isn't bad. Maybe had he try to do some of the vox in clean, ala Neige, it probably would of been a more standout-ish but I am sure he had his reasons for not doing it that way. Still very good, in my opinion.

Overall, a very dark, melancholic album is what you get on Sov Du Lilla Samvete. W has done a very nice job in his work. He has shown that he does have the talent to create a very dark, elusive, piece of melancholic art, even out of self pity. This is definitely a sure listen for fans of the depressive black arts. Mind you, it might take about 2 or 3 listens in order to engulf everything but once soaked, it is sure to leave you in desperation.

Email ThisBlogThis!Share to TwitterShare to FacebookShare to Pinterest
Labels: Verdun