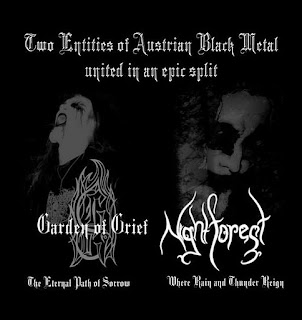 Black metal bands Garden of Grief and NightForest, whom both hail from Austria, have collaborated in this new split. Garden of Grief is the one man project of Boronian Sturmfels and NightForest is a 3 piece which consists of Svart(vox), Da-Vite(drums), and Taranis who handles all the musical arrangements. This split was released on September 19, 2010.

First of all when you think of a split with only two songs by two bands, you think to yourself, only two songs? Is that it? Well not here. What we have here are two thirty minute plus songs by these two talented acts.

Track 1 entitled, The Eternal Path of Sorrow and done by Garden of Grief, starts off and builds up nicely using an excerpt of some sort with folk melodies and female ethereal singing. Then out of no where you hear horses gallop, swords clinging, people screaming, and the sounds of slaughter. Thunder strikes and rain begins to fill the earth and all that is left is silence, death, emptiness.... It then goes into another prologue with clean guitars, some whistle blows, drumming, as it slowly comes together into once piece and then the sounds of a horn is blown. Melodic guitars fill the scenario varying from a mid tempo beat to a much faster build. An ever flow of some nice and catchy melodies continues and takes control throughout the song until it slows down a bit but still keeping that buzzing melody. At times one can be reminded of the infamous band Nargaroth, however, still keeping its own feel. This is one melodic frenzy song that is done very well especially as it leads towards the end which will make your ears bleed and your mind drift into melancholy. For its length and one member talent, it's a pretty awesome track. Hardly a dull moment with some nice scenarios.

Where Rain and Thunder Reign is the second track on the split which is done by NightForest. Unlike the slow build(no pun) of The Eternal Path of Sorrow, this track comes in immensely and roars in displaying a raw and hateful sound of melodic black metal. It carries on for sometime displaying all sorts of tempos and aggressions especially with the drums of Da-Vite. The vocals of Svart fit nicely with this old school black metal vibe. All of sudden all music is stopped and the wind blows as acoustics fill the void of emptiness. Evil laughter fills the air as a slow tempo builds up with a nice guitar vibe and we are off to yet another black metal sound filled with hate. This is definitely a more hellish and old school sound. One can definitely feel the hatred here especially the vocals of Svart and the thin lines of guitar tones. About halfway through the track the melody changes again, this time, with a hint of catchiness and a groovy rock and roll vibe. A nice melody of keys withers in accompanied by some demented speaking vocals that builds up and goes on for a while... until acoustics set back in with a nice and beautiful melody that sets up for an alluring ending. Yet another awesome track.

Overall, Garden of Grief and NightForest show that they both have the talent to make a solid release on their own after listening to this split especially with the length of the songs. This split is definitely one of the longest I have heard. Aside from some slow, but much needed build up, there was hardly a dull moment for both tracks. I congratulate these two bands on a job well done and looking forward to what the new Garden of Grief and NightForest full lengths bring forth.

Email ThisBlogThis!Share to TwitterShare to FacebookShare to Pinterest
Labels: Garden of Grief, Nightforest