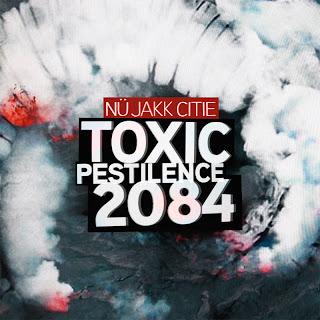 1. Full Body Mutation
2. The Breed
3. The Reassembly of the Megacity
4. Critical Mass

Toxic Pestilence 2084 is the newest EP released and this surpasses anything that they have done in the past in my opinion. While their previous EP, First Blood, was also a good, 2084 just sounds more brutal and mature as far as composition and the directional sound of the band. 2084 pretty much picks up where First Blood left off minus all the experimentation sounds. 2084 is a more straight forward melodic death metal EP. While only around 13 minutes or so, it's a roaring non stop locomotive heading into a post apocalyptic crash. A full body mutation is what can happen to one after a listen. Crushing guitars, speed, blast beats, powerful and emotional, aggressive melodics along with pulsating bass lines takes its toll on this speed demon of an EP. Those wanting to headband profusely, I suggest you check out this EP but watch out, whiplash is inevitable. The EP cover pretty much describes the sounds of 2084.

All in all, fans of death metal should check out this beast. It's got all the ingredients for a solid death metal EP. My only problem with this is that it is a bit short, however, I am anticipating a full length in the future. Nü Jakk Citie surely have done well and I hope they continue to grow. The future of brutality indeed lies within Nü Jakk Citie.