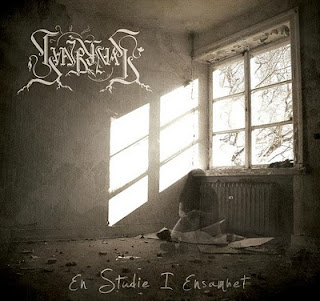 Svartnad was a 2 piece band founded by Tobias "Nightbringer" Lindberg and Karl "Sire Nahvas" Hoverman in April 2008. The first song, Save Me, was recorded shortly after and displayed an interest of depressive black metal ala pioneers Silencer. In December 2008, Karl Hoverman left the band which left Lindberg to recruit Alexander Larrson of Forlorn Rememberance. From this day forth the sounds of Svartnad were bound to change. Rather can continuing in its depressive tradition, Svartnad took a different approach straying away from the Silencer sound and into a more mature post/experimental/rock sound.

En Studie I Ensamhet was released late March 2010. En Studie I Ensamhet brings us 4 compositions with a nice array of emotions and sounds. The title track, En Studie I Ensamhet, begins the Ep with a mellow, slow paced sound. Along with that sound, we get some nice acoustics, dark male vocals, little blackened vox, and some violin type sounds. The sound this song represents is a mix of depressive post rock with some neo folk influences. Nice gloomy opener. Next up is Vinterriket, which brings us to a more faster and aggressive pace of sound. Vinterriket roars in with a melodic yet beautiful sound. There are a few soft parts in between with nice clean male vocals but for the most part this is a wild beast which can be tamed at times. Good sound overall with nice tempo changes and a way different sound than the previous song as well. If there is one song that is pure beauty on this Ep it would be the next song, Amfetamin. This is the return to the soft sound like the first song but this one displays a way more mellow, atmospheric, beautiful sound. The clean female vocals are a great addition to this song and fit perfectly with the sound. Male clean vocals are also displayed in this song. Musicianship is pretty top notch with mellow atmosphere and somber piano. Really enjoyed this song. Monotonisk Depravering, in my opinion, is a continuation of the first song, En Studie I Ensamhet. It pretty much has the same sounds but this one takes it even a bit further with a nice build of aggressive guitars, blackened vox, and depressive male vocals. The softer parts of this song are pretty depressive yet beautiful at the same time but, that pretty much goes for every song on this Ep. A combination of all the songs to close this Ep minus the female vocals.

Svartnad, how to describe their sound? Post Black? Post Rock? Neo Folk? Depressive Black Metal? Pretty much a combination of all them in an experimental way sort of say. I would probably label them as Depressive Post Rock. Svartnad has a more experimental rock vibe to their sound with an influence of black metal. Well, what ever they categorized themselves as, Svartnad proves they can create some alluring depressive, atmospheric songs with this new Ep. I think fans into the post black/post rock scene should check this Ep out. Just a note: Svartnad has this Ep available for free download at their myspace page. Go check it out.

Email ThisBlogThis!Share to TwitterShare to FacebookShare to Pinterest
Labels: Svartnad