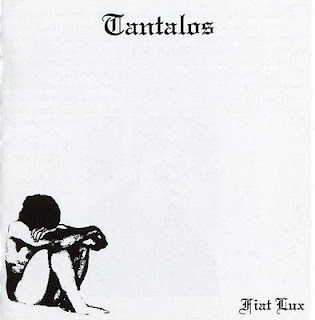 Once and a while I like to check out random black metal acts and it happen to be Tantalos that got my attention this time. Of course, this is another one from my favorite sub genre in black metal. Tantalos arose from the depths of hades in 2008 and is a depressive suicidal blackmetal band with some dark ambiance influence. Tantalos proves that emotion doesn't flow in one constant direction and there is always an emotion, if there is a contrast. For example, we would have no love, if we didn't have hate. We would have no happiness if there wasn't any sadness. What would darkness be without light or light without darkness? Tantalos is the balance of this. Fiat Lux, meaning let there be light, is the first full length and made its debut in October 2009.

Fiat Lux brings us 9 tracks of mournful black metal filled with atmosphere, ambiance, acoustics, violins, and so forth. Exposition is a short interlude filled horror sounding bell chimes and dark ambiance. Gen Einsamkeit introduces to the first tune of Tantalos with thin guitar distortions of mournful riffs and not to mention the superb atmosphere lurking in the back. This tracks builds up pretty nicely with soft parts of acoustics and depressive parts. A perfect equilibrium of emotions to start Fiat Lux. Ein-Alles is a black metal instrumental filled with sounds of melancholy. It goes on more about 7+ minutes and just when you think it couldn't get better, the soft acoustic parts and cello parts come in and makes this song even more promising. Pretty enjoyable track with pretty alluring soft moments. According to the band, Mortalitas presents the 'equilibrium' of the life. The song itself pretty much speaks for itself. Mortalitas is filled with a constant flow of omnidirectional emotions. Depressive melodies take control even at the softest parts once again filled with a violin type sound. This is a very emotional song in my opinion and represents Tantalos at its highest peak, equilibrium.

Ein-Nichts introduces an eerie piano composition which then goes off into a melody with aggressive riffs and mid tempo beat. Really enjoy the guitar melodies here. The sound is not as thin as some of the other songs. We hear blast beats too. Beautiful piano filled with hateful tears. Nice flow of the two. Immortalitas, the counter balance to Mortalitas is next. This is a track filled with grand atmosphere, audible bass, acoustics, and distorted guitars. The echoes to the blackened vox make this song even more chilling and goes nicely with the sound projected here. Next is one of my favorite tracks on the album, Phantasma. Phantasma is a 8+ black/ambient atmospheric instrumental filled with so many manifold emotions. I really have no words to describe the grand sound produced here, it's just really beautiful, man, I don't think beautiful is the word here though. Musicianship is very top notch on Phantasm. Take a listen for yourself and then give me the right word to use... Ok, back to reality on my part after the elusive Phantasma. Schlussstück is a musical version of the poem 'Schlussstück' by R.M. Rilke. Nicely done, a little more experimental in some places but goes nicely with the Tantalos sound. Epilog, the final closure to the album is an ambient track filled with angelic synths, hints of darkness, and experimental drum sounds, Nice closure to Fiat Lux.

Another random band I checked out and another one of my favorites thus far is Fiat Lux. This is why I like to check out bands randomly. Taken, most are pretty general and bland at times but this is one band that still has me intrigued even for the next release. I really enjoyed the equilibrium of emotions on every track. Fiat Lux has its aggressiveness and has its more defining softer, beautiful moments, the the two in one balance. Fans of the depressive black metal genre should give Tantalos a try. It's really like not every other band out there in the genre. Good creative output by Tantalos.

Email ThisBlogThis!Share to TwitterShare to FacebookShare to Pinterest
Labels: Tantalos