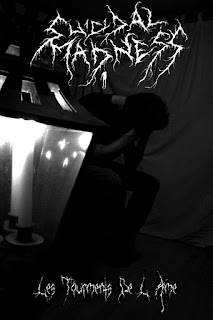 
If there is one thing and I am sure I've said this in the past but when it comes to depressive, suicidal black metal hailing from France, it just owns you with its creativity, well from my experience anyway. So it should come to no surprise that I had to check out this band and well they seem to deliver with their first demo, Les Tourments de l’Âme which was released in April of 2011.

With the start of the Intro, the music will endure you in a black void of distress with its somber riffs and slow paced drums. By the end of the Intro it will have you crawling out for hope. The next track Malade is a bit more up beat but still maintains that bleakness with its depraved yet old school black metal riffage and sound. Power and aggression is what is brought forth. Au Fond de L’abîme continues with its old school melodic black metal tradition. At first it may seem like an experiemtal track but once the guitars and drums kick in around the 3+ minute mark, it is one hellish black metal song. Les Tourments de l’Âme is a bit more different than the above tracks. The track is a bit more vague and overpowered by the loud vocals/screams which seem to be going all over the place. It's until the 2 minute mark where a more experimental ambient sound is brought forth which leads us to the end.

Overall, not a bad demo debut. I think it started strong, powerful, and emotional but until the last 2 tracks, when the experimental side was unleashed, it got kind of dull. Although the end of Au Fond de L’abîme was superb, the ambient intro wasn't too bad. however, it went for nearly 3 minutes and the same could say for the last track, which had a bunch of random guitars and screams and ended with a weak ambient tone. Still, fans that like their black metal raw and old school, you might enjoy this. You might get thrown off by the weak experimental sounds but it will put you back on track once it fades... Suicidal Madness, for the most part, have started off well with its creativity and I hope they continue to grow with their sound.