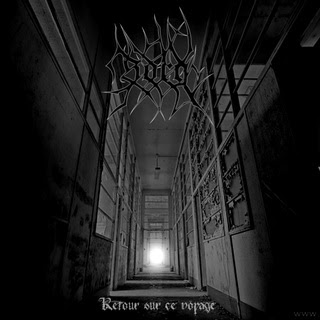 Sorg is a one man melancholic black metal band from France. Malphasis is in charge of all the composition, instruments, and vocals. Retour vers ce voyage is the first full length album.

First of all when it comes to black metal from France, I do not hesitate to check it out. Most bands in the suicidal black metal genre from France tend to be more beautiful and variant in compositions than most. I have yet to find a band that disappoints from France and that's why I will check it out if it comes my way. With Retour vers ce voyage, it's no different. Here we an another outstanding album filled with beauty, solitude, and sorrow.

Retour vers ce voyage delivers 7 tearful tracks of sadistic black metal. The piano based Intro comes in somber and atmospheric with fuzzy guitars accompanying it. Le commencement displays an array of dark beauty with its hellish screams and acoustic strums entwined with an atmosphere of synths and low driven guitars. Second track and already I am won over. Beautiful sound. Perdu dans ce monde is a more guitar driven track with cold riffs and a pretty nice solo. L'affrontement continues with melodic smooth riffs and even a more outstanding solo. It's rare that I hear solos in this genre, nice addition. From middle and on, L'affrontement turns into a calm and complex acoustic piece and then it leads into a edgier side of it with distorted guitars, devilish vocals, and little ambiance. Sombre échappatoire begins with a down tempo sound filled with bleak piano, synths, and over driven guitars. This doesn't last long as Sombre échappatoire speeds up into a distorted madness of melody and sound. Evil black metal acoustic strums are added nicely with eerie atmosphere and dark whispers. Nice groove of a black metal sound here. Remind me again why I love black metal from France! Ebloui par cette lueur brings us a blackened doom track filled with dark atmosphere which builds up nicely to a nice fast paced black metal sound. The Outro leads us out slowly with devastating screams and distortion.

Overall, another great album from another French band. There is something about France that just takes it up a notch in the black metal scene. Retour vers ce voyage delivers with its depressive, devilish, and above average musicianship from Malphasis. Acoustics and atmosphere are not over exceeded and only used with the sound to enhance it, not to take total control like most bands tend to do. This is truly an art of melancholy. Fans of the genre will not be disappointed. Looking forward to what Sorg brings forth on its next release.

Email ThisBlogThis!Share to TwitterShare to FacebookShare to Pinterest
Labels: Sorg