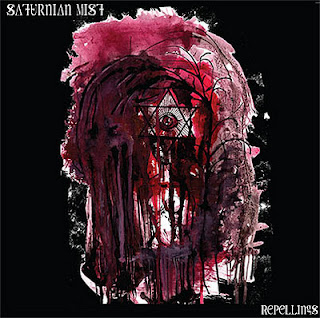 1. The Manifestation
2. A Call In The House Of Malign
3. Threshold In Maleficent Grace

Saturnian Mist is a raw black metal band from Keski-Suomi, Finland. Their lyrical themes include Occultism and Satanism. Repelling is an mCD to follow up of their self titled demo which was released in 2008.

Repellings features 3 chaotic tracks of riff oriented black metal tracks. The Manifestation proves what the band can an accomplish at a pretty good level. The Manifestation contains roaring drums and aggressive melodic riffs that keeps the listener interested throughout the whole 8+ minute mark. Very nice opener and probably the best track on the EP. A Call In The House Of Malign proves that speed is not the only answer and that the band can create slower music as well. A Call In The House Of Malign is a mid paced suicidal black metal track filled with some memorable crunching riffs and an eerie guitar atmosphere. No acoustics, piano, or ambiance here, just a raw and depressive sound like it should be. Threshold In Maleficent Grace takes what was incorporated in to the first 2 tracks and entwines them. Threshold In Maleficent Grace starts out as a pretty fast black metal but the tempo changes ominously from hyper speed to mid paced throughout this 11+ track. At the hyper speed sound, devilish and chaotic vox and riffs are exposed creating a destructive force of blasphemy. At the mid paced sound, dark and melodic riffs takes over the sounds with some suicidal guitar tones and what not. Nice combination of the two are displayed on this track.

Overall, Repellings is pretty good. Yes, it does take more than a couple of listens to soak in everything but when it does, Repellings is an unstoppable force not to be messed with. While Repellings might not be for everyone, it delivers everything from the aggressive raw black metal sound to the echoes of deprivation of the the suicidal genre. Overall, a good balance of the two done in a obscure and professional manner. I am looking forward to what these guys come up with next.