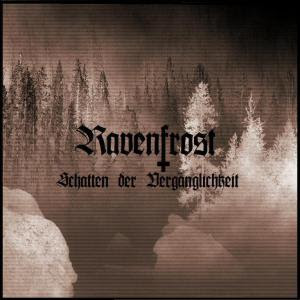 Ravenfrost is one man experimental depressive black metal band hailing from Germany. Ravenfrost consists of K. who does all instruments and vocals. There are currently three demos from 2007-2009 and this latest EP, Schatten Der Vergänglichkeit. Schatten Der Vergänglichkeit was released on August 1, 2010 through Victory By Fire Records which is now under the same owner as Svartgalgh Records.

Schatten Der Vergänglichkeit begins with "Black Funeral Mass" which displays a nice array of dark and haunting ambiance around. Next comes the dark melodic sounds of "A Brief Glimpse Of Treacherous Hope." One can hear some nice killer melody and even a hint of groove at times. The added bell chimes towards the middle give it even a more sinister vibe. Nice guitar work all around on this track especially as it grows towards the end. "This Pain Is Like An Everflowing Stream" follows and is accompanied by some industrial effects at first but then even grows broader with dark haunting and eerie atmospheric sounds, nice acoustics, and piano throughout the track. Nothing is overdone and all the dynamics fit together creating a dark and somber piece of art. This is definitely the favorite of the album.

"Vizards To Our Hearts" (featuring Vintage Flesh) is up next. This pretty much picks up from the last track however this one is a bit more heavier, evil-er, and faster. This track is a more traditional suicidal black metal track however surpassing most bands in the genre. A bit of clean vocals are introduced as well as some nice shrieking not heard on any track. Another successful track is what we have here. And finally we have the 2010 mix "Einsamkeit" which is previously off the 2009 demo, Ein Streifzug Am Abgrund Der Seele. I really haven't heard the previous version so I can't really compare the sounds between the both. "Einsamkeit" is definitely a more a progressive track and might be kind of bland at first listen, however as you listen more and more, the ingredients start to fit in. It might sound pretty random at first but gets better especially towards the end of the track as it fades away.

Overall, Schatten Der Vergänglichkeit delivers with good and dark intentions especially on "This Pain Is Like An Everflowing Stream" and "Vizards To Our Hearts." Those two tracks are worth the Ep alone. Unlike most generic clones out their in the genre, there is just something about Ravenfrost that just stands out. After checking out Schatten Der Vergänglichkeit one might want to go to the back catalog and listen to the earlier demos. Suicidal depressive black metal fans, this is sure to be a favorite in the genre.

Email ThisBlogThis!Share to TwitterShare to FacebookShare to Pinterest
Labels: Ravenfrost