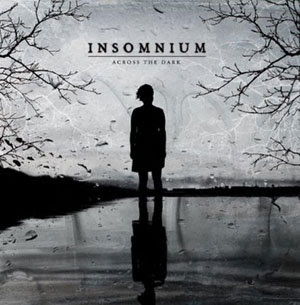 1. Equivalence
2. Down With The Sun
3. Where The Last Wave Broke
4. The Harrowing Years
5. Against The Stream
6. The Lay Of Autumn
7. Into The Woods
8. Weighted Down With Sorrow

Insomnium is a melodic death metal band from Finland. Most people have said that this band was Finland's best kept secret until now. When In Flames decided to drown us with a change and go towards a more different direction, fans said Insomnium basically took their place in retrospect. Insomniun started out as an In Flames clone but later on transgressed from album to album adding little synths, violin, and going for a more melancholic approach. Across the Darkness continues the flow with a very high peak of musicianship for the band. Insomnium have worked hard for this album and it has payed off.

The album begins with Equivalence which is a very nice opener that builds up slowly into melancholic melody. From there, it carries on to Down with the Sun. The musicianship of this song is top notch in my opinion. They offer us another nice build up of melodic death with a catchy outburst of riffs. Two songs into the album and already it keeps their listener intrigued and glued to the sound. Where the Last Wave Broke continues in vain of Down with Sun, however, adding clean vocals. If I am not mistaken, this is the first time Insomnium introduces clean vocals to their sound. While they might not be everyone's favorite style, these clean vocals add dimension to the emotional feel of the song. The sound slows up with the next track, The Harrowing Years. This song has a nice slow, melodic vibe throughout with a catchy chorus of clean vocals.

Against the Scream roars in with speed, aggressive melodic riffs, and little synth atmosphere. While not fast all the time, there are several tempo changes though out. This sounds like a faster, more variated version of Down with the Sun. It definitely keeps the adrenaline going. Back to midtempo sound with The Lay of Autumn. This song brings back memories of In Flames during the "Whoracle" album. Nice mellow song with acoustic strums and ravishing electric guitar. They do incorporate elements of their own for the most part making it their song. Into the Woods follows with its crunchy riffs and various speeds. The chorus melody of this song is done very well. It's almost like a pagan/folky sound but not really, though, it will probably get stuck in your head for days. Nice change of sound there. Weighted Down With Sorrow opens up with somber and mournful violins and carries on to a nice flowing ballad filled piece with mellow guitar riffs and harmony. This is a nice drastic epilogue from the chaos portrayed throughout the album. Weighted Down With Sorrow ends the album with a perfect closure and a high note of musicianship.

Fans of melodic death, check this album out asap. New fans, why not give Insomnium a try. Chances are you might like it. This is definitely one of the best melodic death albums I have heard in a long time. It has speed, softness, killer riffs, catchy melodies, and superb musicianship, all to entertain you, the listener. I suggest you at least listen to this album and give it a try. It's way better than most melodic death bands these days and I am not over exaggerating. I really hope that this album puts a name out there for Insomnium. I am going to have to check their back catalog again. It would be pretty interesting to see where the band goes from here. This sounds like it cannot be topped but that's what people said about their previous releases. I guess we'll see. Across the Dark is one of my top ten albums of 2009 and for a good reason. Check it out.

Email ThisBlogThis!Share to TwitterShare to FacebookShare to Pinterest
Labels: Insomnium