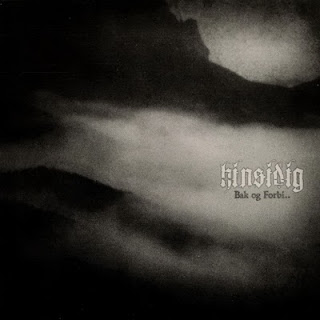 First of all, I am glad I found this demo lurking about from the label Pest Productions. I've had it for quite some time now and never bothered to check it out until now and wow did I almost miss out on this incredible band. Hinsidig is an atmospheric black metal band hailing from Norway and Germany. This band includes the drummer Winterheart from such depressive acts as Nyktalgia, Sterbend, Total Hate, and more. Hinsidig describes themselves as primitive black metal with some early Ulver influences. I will say that at times there are some Ulver influences such as the clean vocals and as far as being primitive, they are right on point especially with the atmosphere, one will be reminded of Emperor's In the Nightside Eclipse at times.

The demo begins with Intro - Euforisk Depresjon that starts of with some astounding ethereal male vocals and atmosphere that is just to die for. It progresses slowly with a mix of nice depressive guitars and a beautiful yet dreary atmospheric vibe. Within the first minute of the demo, be prepared to be mesmerized. Excellent introduction. Livets Sløs is a black metal track filled with dark and aggressive suicidal riffs, austere acoustics, and alluring atmosphere. From the middle and on we get a nice little added acoustic interlude that builds up with the flawless drums of Winterheart especially when it goes into a marching band type drumming style. It carries on with atmosphere, flowing mournful riffs, and extreme vocals. Really, the musicianship of this song is fucking flawless. One of the best songs I have ever heard in the genre.

Bak Livets Forheng kind of takes us back to the Emperor's In the Nightside Eclipse at times with its enthralling atmosphere and sound however Hinsidig adding their own inventive ingredients too, one being the clean vocals which can be reminded of Ulver. Bak Livets Forheng contains a lot of aggressive and haunting guitar melodies and harmonics. I really don't know how to describe this but this is black metal done right and once again the drums of Winterheart are superb. Another great song! We then fade in shortly into the somber acoustic strums of Gudsforlatt for a bit and then all atmosphere breaks loose along with some clean male aaahhhhhs. Beautiful start and build up. Gudsforlatt then turns into an artistic bleak form of beauty filled with excellent gloomy riffs and harmonics and eerie atmosphere. I can't stress this enough but again another great song. We finally end this awesome demo with Outro - De Siste Dager Mot Ragnarok (Pt. III) which is a short, dark, experimental piece filled with ambiance, spoken vocals in both clean and distorted, and some nice guitar background sounds. Good closer, not as good as the intro but good nonetheless.

In summation, I would like to point out that this is probably the best demo I have heard in sometime. I didn't know a demo could be so good. I urge every black metal fan to check out this demo, ASAP. Everything is on par, the atmosphere, vocals, guitars, and drums. The musicianship is really top notch quality, nearly flawless. They don't over do any of the sound or bore the listener at all. Each song is unique in its own composure and has a nice array of melancholic flow. Bak og Forbi... is one paramount aesthetic piece of music. Hinsidig have a full length currently in the works and I can't wait for that. It might be just one of the top 10 of the year already if it's as adorning as this demo. Hinsidig may be a new act of black metal but will captivate all fans of black metal, new or old.

Email ThisBlogThis!Share to TwitterShare to FacebookShare to Pinterest
Labels: Hinsidig