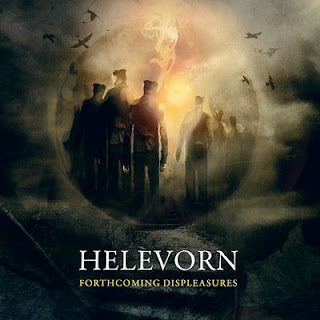 1. From our Glorious Days
2. Descent
3. Two Voices Surrounding
4. To Bleed not to Suffer
5. Revelations
6. Hopeless Truth
7. Yellow
8. On Shores (of a Dying Sea)

Helevorn is an atmospheric doom metal band from Spain. Helevorn formed in 1999 and released a demo in 2000 entitled Prelude which was a pretty good success within the gothic/doom genre and amongst with underground press. In October of 2005, they released their self titled album, Fragments, which led to a darker and heavier mood with some melancholic sound scapes. Fragments gained them more fans and fame. They evidently became one of the best doom metal bands in Spain. In 2006, they were asked to be on December Songs which was a tribute to Katatonia. In 2007, they supported Swallow the Sun on their Spanish and Portugal tours. In 2008,they made an appearance on Spain Kills, which is a compilation of the most important Spanish bands. They have had the pleasure to gig with such bands as Swallow the Sun. November's Doom, Draconian, Saturnus, Dismember amongst others. In 2009, Helevorn began recording for the next coming album Forthcoming Displeasures. This time around the production was done by none other than Jens Bogren and Johan Ornborg. (Katatonia, Paradise Lost, Opeth, etc) With their help, Helevorn worked on their next musical step and got some good end results. Forthcoming Displeasures, released in Feb 2010 is their doomest work to date.

Forthcoming Displeasures brings us 8 illustrious dismal tracks filled with saturnine melodies and the resonance of the doom metal genre. With the start from the first track, From our Glorious Days, one can already tell that from the outstanding atmosphere and riffs that this album is gonna kick some serious ass. Beauty is displayed with heavy and melancholic riffs with death grunt vocals. Piano is added to further the dimension of this song along with the clean vocals. Off to a good start so far. Descent begins with some gloomy atmosphere and spoken passage and then becomes a doom frenzy with dark riffs a crunchy doom sound. The atmosphere along with the guitar tone and harmonies is what steals the show on this track, Nice and slower doom track. The ever beauty of Two Voices Surrounding comes in next driven by a nice piano intro and sound. Clean and somber vocals take control leading up to a nice smooth riffs of melancholy. Death grunts take control from about the middle and interchanges between clean and death. Two Voices Surrounding can get pretty catchy at times with the vocals and harmonics. Go with the flow. To Bleed not to Suffer follows into a heavier driven darkness filled with light violins and atmosphere. This is definitely a more forceful track with grains of beauty all around. Epic range of clean vocals are found here. Very somber, yet aggressive track. To Bleed not to Suffer surely displays the beauty that is doom.

Guitar harmonics surmounted by atmosphere takes control on Revelations. This is a slightly faster doom rock track filled with eloquent piano, nice guitars, and harmony. Hopeless Truth slows down again filled with dark guitars, eerie piano keys, and ethereal clean male vocals. The song takes a slight change from the middle and on building up to some the most beautiful somber and harmonic riffs ever heard. Enjoyable gloomy track. Yellow continues in the same tradition as the previous track however a bit more mournful and not as aggressive or forceful. Still, the crunchy doomy riffs here are top notch, as well as the overall sound. Nice build up towards the end. On Shores (of a Dying Sea) begins softly with some soft clean guitar strums and then transforms into a doom machine filled with eerie sound scapes, mournful clean vocals and aggressive death grunts. The guitar riffs with their blissful strums make this a very dreary piece that ends on a soft note of beauty.

Overall, Forthcoming Displeasures does not disappoint. Every ingredient to make this a magnificent opus is there. Well done clean male vocals, aggressive death grunts, beautiful and eerie atmosphere, crunchy doomy riffs and harmonics, and superb musicianship, it's all there to make this a masterpiece. Helevorn is one of the best doom metal bands in Spain and it shows here on Forthcoming Pleasures. So far 2010 has been a good year for metal especially with Helevorn. Anyone that is a fan of the doom genre should definitely check this album out. Chances are you won't be disappointed. I am anxious to here what Helevorn what will come up next and how they will compass their sound to even a step further with their next release.

Email ThisBlogThis!Share to TwitterShare to FacebookShare to Pinterest
Labels: Helevorn