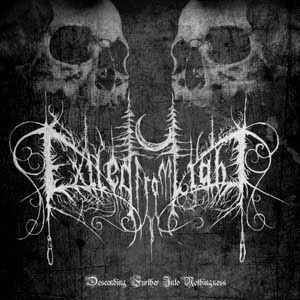 Exiled from Light hails from New Zealand and is the depressive black metal project of Mort from When Mine Eyes and other bands. In 2008, the first full length, There is No Beauty Here, was released and made a pretty strong impact in the depressive black metal genre amongst fans. Mort continues the tradition with his sophomore release, Descending Further into Nothingness, which is another superb release.

Descending Further into Nothingness is an album filled with darkness, loneliness, and depravity. Along with those three, eerie and mellow vibrations are found throughout the album. Mort tends to use echoing guitar riffs, some repetitiveness, and dark ambiance within this project to sink the listener into a void of bleak. Mort has succeeded this time again. It seems that with every song, the sounds of Exiled from Light just keeps getting better and better. Vocals are pretty good compared to most depressive bands. The use of acoustics are added as dimension to the song rather than over powering and over using as consecutive interludes like most bands tend to do. There are a lot of beautiful and chilling acoustics throughout. The musicianship overall is at a high level of constant depravity at a nice paced tearing flow.

Descending is what it says. This interlude ambiance sinks the mind into the abyss from the start. Further into Nothingness takes us even deeper into a world of solitude with a nice slow tempo and build up with melancholic riffs. Neath the Opressing Moonlight brings in its beautiful acoustics and melodramatic sounds making the mind wonder as it envisages a reflection cast of the moon over a clear lake filled with stillness. Lurking Within Twilight continues as before with a nice mellow sound of ambiance and aweness. Some of the most beautiful sounds of ambiance, atmosphere, and riffs in the genre can be found on this song alone. Very beautiful. Suffering Waits with Wide Open Arms which is about an 11+ minute track gets even better. Along with length, one can still expect Mort to keep the listener intrigued. Darker and mind chilling riffs of melancholy circum by dark atmosphere steal the listeners ears here creating a top notch depressive sound that may lower your self esteem and think about life. As as 11+ track, there is hardly a dull moment. When you think it's going to get too draggy, Mort just comes up with something new to interest the ears for a bit. This, in my opinion is the pinnacle of this album. No offense to the other tracks because they follow right behind one by one. Drowning... is filled with echoing guitars and blasphemic tremolo riffs at a mid paced sound. This is a slightly darker and more aggressive sound but still keeping the eerie moods of ambiance in a hateful way suffocating you into a lake of oppression and into a downfall of hopelessness.

Overall, a great piece of dark art by Mort just like the predecessor, There is No Beauty Here. It seems this guy can't do wrong as far as Exiled from Light is concerned. Every song is just beautiful in its own way on this album. Every song builds up and adds a slight variant element of mood. Everything is superb on this album. From the melodic riffs, to mid paced tempo, to the eerie and ambient soundscapes, they are all top notch. Nothing is over done. It's just a balance of perfect musicianship. A lot of memorable and depressive riffs will catch the listener and drown him/her into a state of sorrow. Fans of the depressive genre will highly enjoy the sounds of Exiled from Light, I can guarantee that. Recommended for a dark music lover in metal.

Email ThisBlogThis!Share to TwitterShare to FacebookShare to Pinterest
Labels: Exiled from Light