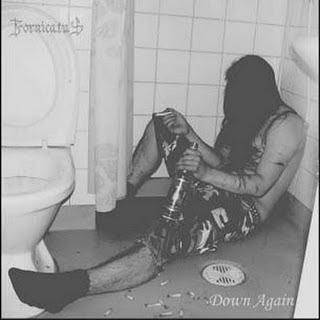 Fornicatus is a suicidal black metal band hailing from Finland. Fornicatus was formed in 2006 and have had a couple of demos, a split, and a full length. Members consists of Morbid, Deimos, and Panzerfaust. Down Again is the newest 7" Ep the band released in 2010.

Down Again consists of two tracks but surely these two tracks are some of the best songs out there in the genre. First of all, I will say that production is great for this sound. It's not too lo-fi or high in cleanliness. It just perfect for the sound being accomplished. The first track, Down Again, is filled with dark aggressive guitars riffs with an everlasting melancholic flow. A small tempo takes effect towards the end adding a nice little morph to the track. Longing for Cold explains itself. This is an excellent track filled with cold atmosphere and gloom. Piano and synths blend in together nicely in the beginning and then goes into a beautiful piece of deprivation. I really have no other words to describe the songs but to the point because they are pretty much priceless in their own way. You listen and be the judge.


In summation, how to describe this 7" Ep? The vocals are done well in the shrieking suicidal vain. They don't outdo the vocals where they over power the music like most bands in this genre to do. Bass is heard on and off which is a plus in this genre. Guitars are nicely done, not too distorted to the point where it sounds terrible. My favorite aspect about this Ep is definitely the drums of Panzerfaust, which can be clearly heard through each track. Excellent performance. The musicianship overall is pretty mature and stellar. This Ep surely got me glued to this band for now and makes me want to check out their early stuff which is probably just as good, if not better. Fans of melancholic black metal, it wouldn't hurt to give this a listen, surely it will engulf you in a thought of solitude, depression, and hopelessness.

Email ThisBlogThis!Share to TwitterShare to FacebookShare to Pinterest
Labels: Fornicatus