Drowning the Light-The Blood of the Ancients Review 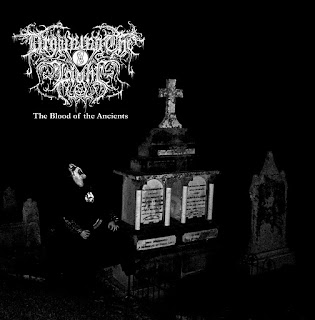 1. So Far from Home
2. Night of Neverending Turmoil
3. Chamber of Lost Hope
4. Lunar Reflection in Blood (Vampyres of the Old)
5. The Darkness is the Guiding Light
6. Residing in a Kingdom Now Lost
7. Servant of an Unholy Plague
8. When Dusk Breathes its Last Breath
9. Victory in Sight

Drowning the Light is a suicidal depressive black metal band from Australia. The current line up features one member Azgorh. As far as I know the band releases a lot of demos, full lengths, and splits so sometimes it's hard to keep up with their material. I have heard this band in the past but I can't remember what album it was. It's been a while.

On to the music, the beginning instrumental intro So Far From Home brings forth some nice acoustic and keys. You can feel the distance and somber.

Night of Neverending Turmoils comes black metaling in, The production of lo-fi atmosphere is brought forth into the mix. Nice midtempo song with some nice guitars that build up to a faster rhythm and then back again to a mid tempo sound. This sound reminds me a bit of a song found on Transilvanian Hunger album by Darkthrone only more melancholic.

Chamber of Lost Hope comes fading in to a mid tempo beat. The vocals hear seem a bit meh, due to the production, but the musicianship itself of the song brings forth a lost hope of sorrow.

Screeching in to a faster rhythm comes Lunar Reflection in Blood (Vampyres of the Old). There are lots of melancholic guitar riffs through out the song. This song never changes it's rhythm. Fast and good! No mid tempo here.

The Darkness is the Guiding Light begins with some keys synths which are more in the background and not overpowering the guitars and other instruments. Beautiful riffs and somewhat catchy mellow rhythm flow through out the song. There are more keys which give the song definition and an eerie sound towards the end. Depressive song!

Residing in a Kingdom Now Lost begins with fast drums and some nice clean vocal background sounds which accompany the fast paced music beautifully. The lo fi sound on this album just makes it more captivating.

Servant of an Unholy Plague riffs in with screech and despair. This song is the shortest song on the album besides the intro. Catchy rhythm and a steady sound.

The beautiful atmospheric sound of When Dusk Breathes its Last Breath comes in next. This is my favorite track on the album. It just so beautiful. Melancholic guitars, atmosphere, acoustics, and haunting keys. This is one of the better songs I have heard in the suicidal black metal genre as a whole really. I really didn't want this song to end. Thank You.

The ending track Victory in Sight displays a more hateful sound than the previous track. The middle to the end of the song displays some mass depressive riffage with some key atmosphere. Really good closure for the album.

Overall, a good album. Drowning the Light displays a diversity of melancholy, hatred, and some epicness to its raw sound. I will say that at first listen this album was good but after listening to it again, it was even better, so this is probably an album you might have to spin a few times to get into. Pays off though. This is indeed for fans of the depressive, black metal sound.

Email ThisBlogThis!Share to TwitterShare to FacebookShare to Pinterest
Labels: Drowning the Light