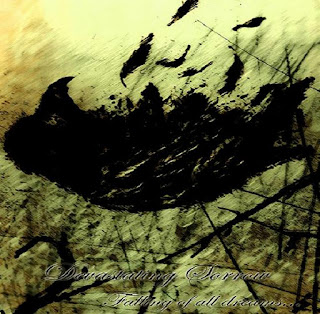 Devastating Sorrow started out as Mephisto's solo project in 2009. At one time Devastating Sorrow was an experimental depressive black metal combining elements of doom however the band evolved into a more a melancholic route with variant influences such as post rock and the like. Devastating Sorrow now consists of Mephisto, Alexander, and Dmitriy.

In 2010 they released the successful album, Grief Silhouette...Serenity Shade. Now, in 2011 they bring forth a new EP, Falling of All Dreams. Falling of All Dreams continues where the last album ended, however minimizing those soft spots and post influences by a bit. Don't get me wrong some experimental influences are there but not by much. Falling of Dreams consists of an intro and 3 solid tracks of depressive black metal.

On first note one can sense that the production overall is pretty good, well at least for its sound, not to clean and not to murky, just right. Follow... opens the Ep with its ambient dark atmosphere and sorrowful touch. Dead Rain continues on with its midtempo beat and dark, melodic riffs as rain pours on helpless victims in solitude. Dead rains brings forth a constant sound of melancholy especially as it grows towards the end. ...Hysteria of Despair starts off with its softly piano touches but quickly moves on into a ravishing sound of black metal. Blast beats, melody, melancholy all mashed into one strong sound. This is one awesome black metal track filled with all the ingredients needed to make it work. This track also reminds me of an old school black metal track as well. And finally, the ever so wondrous track, A Scarlet Tears of Autumn. Wow, what a beautiful track. This is indeed how black metal should be done. This sort of reminds me of bit of old Dissection mixed with early gothic metal atmosphere. Oh the riffage on this track slays especially with the violinish touches mixed in the back. Indeed this is a good way to end the EP, however it leaves you craving for more.

All in all, it seems that Devastating Sorrow are heading in the right direction. I don't know if it's me but they seem to be slowly getting away from those experimental soft/post-ish influences or rather cutting down but that is not necessarily a bad thing. To tell you the truth all the experimental sounds and soft touches haven't been over done by the band yet and it's just enough to satisfy the craving without getting full. I really enjoyed this EP and looking forward to what they can bring next.