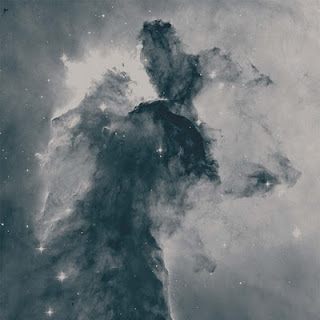 When it comes to the underground metal scene these days, it seems a lot of bands in the depressive melancholic genre are taking a new turn adding experimental post like rock elements to its initiative. That is the case with Cold Body Radiation who hail from the Netherlands. There are many bands that make up the post black/rock genre, however, this band is one of the few that impresses with its creativity.

The Great White Emptiness brings us 6 tracks filled with beauty, aggression, and despair. It mixes the raw sound of black metal with clean, dreamy atmospheric post like elements. Clearly they focus on the atmospheric parts while most of the metal parts have more distorted sound scape. It's done in a very good way and it gives definition to both parts.

Emission begins the album with a slow sound, acoustics, and a melancholic atmosphere. Notice the bass, very audible as it is throughout most of the album. Actually, the bass ludes are one of my favorite things about this album. Listen to the album and you will see why. I am really at a loss for words on the next track, Loss. This track melts my heart. cliche? Probably but it does that with its more upbeat tempo and awesome guitar sounds and effects. The atmosphere on this track is too die for. Once again, nice bass ludes. This song surely is worth listening to alone. Such melancholy and beauty.

We slow it down a bit for the next few tracks. While listening to White Light, one will surely think of the experimental rock band Jesu. Slow melodies filled with sub par atmosphere and blackened vocals. Radiation/Radiance continues in the same tradition as White Light however, focusing more on the experimental side than with the metal as before. This track is filled with light clean vocals, whispers, black vox, eerie keys, and more haunting atmosphere. Nothing is filled with more blackened vox accompanied by dreary atmosphere. Another slow song but filled with a constant flow of beauty and despair. The Great White Emptiness ends the album with a more slow doom like vibe still carrying those elements that are heard through out the album. Doomy and atmospheric describes the last track, The Great White Emptiness.

Overall, not a bad listen, though it could of probably used some more up beat songs like Loss. It tends to drag a little with all the slower songs in the middle but they all offer something different. I am not complaining though. This is good music. So far this band is on the right track, just hope next time they can use some more upbeat tracks. I am sure this sound might not be for everyone but at least listen to the song Loss on their myspace page. If that doesn't captivate you, then I really have no clue what to say. This is for fans of the melancholic/post black/rock genre.