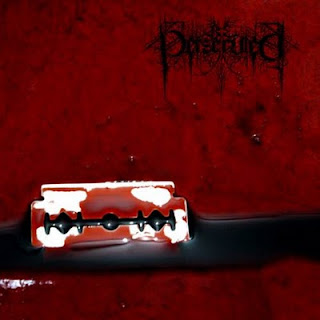 Be Persecuted is a suicidal black metal band from China. End Leaving is the follow up to the previous full length I.I which was pretty good. Be Persecuted have manage to put a better album this time around. The production is even more clearer than the previous one so it's easier on the ears. Also, the sound here sounds more mature and overall the musicianship is better than anything they have put out to date.

Distortion entwined with acoustics starts The Last Night. The vocals on the album are like howling screams but they are actually done good here with the production and it is good for the sound they are putting out. The Last Night continues into a melancholic midtempo sound. Some nice and eerie atmosphere is added to the sound making it more beautiful. The Last Night is pretty much a long intro than a song. Speed, black metal melodic riffs, and heavy blasting all flow in with The Last Right. It slows down a bit as it goes but still keeps mournful atmosphere and riffs. Some random low acoustic strums are mixed into the mix creating a beautiful scene. At one point of the song, the guitar tone changes and creates a sadistic strum of melancholy. Sounds of random drums starts out the track, All End Soon. This song, like the others, incorporates an eerie atmosphere with haunting melody and beautiful sound. Some low bass can be heard on this track and it adds dimension to the music. The music starts to fade in the middle but comes in again with all aggressive vocals and all. Nice song filled with atmosphere and melody.

We slow down with the next track, End Leaving. This song has little experimental sounds for its taste. This track is filled with a constant flow filled with awe-ing riffs and sound. This proves that music of Be Persecuted can be a bit slower and still be appealing. Nicely done song, one of my favorites on the album. Swirl shows so much how mature they have gotten since I.I. Swirl continues in the same tradition as End Leaving but with a slightly thinner produced guitar sound. Some weird low/mid-high vocals are thrown in the sound here but it goes good with the beautiful atmosphere on this track. Nice flow of musicianship. A Storm hovers in the scenery with Curtain Calls. Slow acoustic strums with mellow atmosphere and some birds chirping take effect. Curtain Calls slowly builds up into an acoustic piece of aweness. No vocals, no electric riffs or drumming. Just the rain flowing onto the ground with acoustics that fade way.

Overall, a big improvement since I.I which I already established. They seem to be slowly defining their own sound which is good. There are a lot in the depressive scene that just over do it but this band just does it right this time around. Better production, musicianship. I hope they continue on the same path they are now with the next release. In time, Be Persecuted will be known to those that follow the genre if not already and they will gain many more fans with this release.

Email ThisBlogThis!Share to TwitterShare to FacebookShare to Pinterest
Labels: Be Persecuted