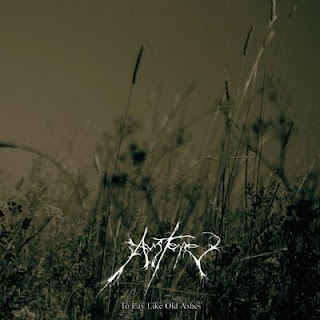 Austere is an Australian depressive black metal band. They currently have two splits, one full length and now this one. Austere can be described as a black metal band who utilizes tearful screams, mournful riffs, and dark atmosphere into one combustible element. Hints of Burzum and even the mighty Agalloch can be found on this album.

Rainy and mellow atmosphere with soft acoustic strums begin with the instrumental Down. To Fade with the Dusk speeds in with murky riffs and the speeds of blast beats to a nice smooth midtempo ever sound of somber with tearful vocals and beautiful atmosphere. Nice opener there. This Dreadful Emptiness continues on with the melancholy as the previous but a bit more slower though incorporating more aggressive riffs and technical drums. From about the middle of this song comes in some little piano and that's when sorrow is dwelled with some of the most beautiful riffs and atmosphere I have heard in this genre. It is just an epic opus of sorrow and gloom in a very perfect manner. Some clean vocals come into the mix and just makes this opus even better. Haunting, sorrow, and despair is what you get from This Dreadful Emptiness.

To Lay Like Old Ashes follows with its constant flow of screams and mellow riffs. From middle and on from this song, a bit of Agalloch-esque sounds can be heard whether it be the atmosphere, riffs, the constant flow, or vocals. Next comes in the epic, Just For A Moment. This songs starts off with Agalloch inspired riffs again and gradually builds up into an epic piece of melancholy. The clean vocals here, which overrule the majority of the song, are much more different but more emotional with sound. You can hear the pain in these vocals and they will probably give you a tingly sensation. Awesome sound with emotional and powerful vocals. Oh, how I love this genre more than any other. Now comes in the 20+ minutes of Coma II. This song builds up very slowly with a sound of repetitive dark, random outburst of riffs, and eerie atmosphere. It's not till about the 12 minute mark that there is a slight change but not by much. It's just a lighter distortion and atmosphere of what we heard before and then it goes back to the heavier distortion and atmosphere ending the album.

Austere have certainly done it with To Lay Like Old Ashes. Everything I ever wanted in a depressive black metal band can be found here. From the nice production, to the audible drums, and to the excellent musicianship. While the genre might not be everyone's favorite, Austere is definitely a must listen, especially this album. I don't know what it is about Australia and all these good depressive black metal bands coming out all of a sudden. Really good stuff. Listen for yourself and be amazed!

Email ThisBlogThis!Share to TwitterShare to FacebookShare to Pinterest
Labels: Austere