Araxas-Suicide of my Mind Review 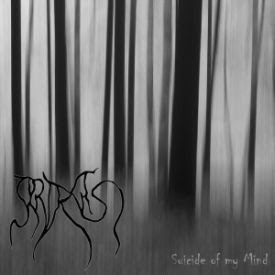 We start with the Intro which is an instrumental with keys and ambiance. Here you can tell that this is going to be a melancholic album with beautiful piano and atmosphere. In comes the first song, Meer aus Wunden, which has a pretty atmospheric entrance upon listening. The sadistic vox are introduced adding a dimension of hatred towards the haunting atmosphere of ambiance and guitar riffs. Nice song to start off the album.

The title track Suicide of my Mind is next and this is one of the most inspirational and beautiful songs I have ever heard in this genre. The song starts off with thunderstorm and melodramatic acoustics for about 4 minutes and then comes in smooth, aggressive riffs acompanied with some minor atmosphere and out it disperses into some of the most awe-ing black metal I have heard. There's also some shade of post rock elements on this song which is probably an added bonus, well for me anyway. The songs ends around a 12 minute mark though, this delivers, never a dull moment.

Ein dunkler Raum pretty much continues where Meer aus Wunden left off though not as atmospheric. Still this songs does its justice with its mellow guitar riffs and desperate cry for help screams. The final song is Life. This is the second longest song ending at about the 8:25 mark. Life starts of with electric acoustics till about the 2:25 mark and then continues with its usual melancholic riffs and hateful vox. This song is probably the slowest of them all on the album. Even at a slower mid tempo pace and not containing contain much piano or atmosphere like the others, the guitar riffs are what makes this song stand out. This proves that music can be written beautifully without the use of piano or much atmosphere.

Overall, a good album by this one man depressive black metal band. It definitely contains the ingredients for a good album though, one must give it a few spins to actually soak it in. From beginning to end, this album will take you on a rollercoaster of depravity, from melancholy, to hate, to aweness, in its raw. I recommend this album to fans of the depressive black metal. Also note, all of Leonhard's Araxas demos are free to download at his myspace. The link is listed below.

Email ThisBlogThis!Share to TwitterShare to FacebookShare to Pinterest
Labels: Araxas