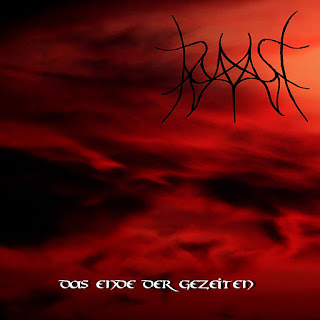 Araxas, the Austrian, depressive, one man, black metal project of Leonhard Waltersdorfer is back with another demo. Last, he brought forth a beautiful piece of melancholic black metal in Suicide of my Mind. Now, he brings forth another dark piece, Das Ende der Gezeiten.

Am Abgrund der Welten starts off the album with some slow, beautiful piano arrangements which then carry on to a cry for help black metal sound. The vocals of Leonhard Waltersdorfer here are wonderful. Nice, high shriek, non distorted, out bursts of help. The song has a nice mellow interlude in the middle and then goes back to bliss. Pretty good opener for the album as it gives the listener what to expect, if not better. The Unending Darkness comes next delivering a mid tempo depressive sound with dark guitars and an acoustic interlude which blends nicely with its raw sound.

The title track, Das Ende der Gezeiten, follows with somber acoustics and then into a bleak, atmospheric piece with some synths added. The song speeds up with rapid, hard pound drumming and haunting, dark riffs and then back to its atmospheric mid tempo flow to finish the song. Das Ende der Gezeiten is probably the best and inspirational song on the album in my opinion. The Door to Myself is probably the strangest song the album due to some added weird, experimental effects though still keeping that melancholic sound. Some nice piano comes in the mix from the middle and on. Strange, yet beautiful piece. Das Ende naht is next and is the longest song on the track reaching to about a little over the thirteen minute mark with hardly a dull moment. Das Ende naht begins with mellow acoustics hovering over a stormy and withering scene. From a dust comes in guitars, keys, interludes, and melancholic synths, probably the most calming and beautiful of the album, leading the song and then closing in a somber way. Epic closure for the album.

Overall, a good album. And whilst it doesn't surpass its predecessor, Suicide of my Mind, it still packs a punch or two. The dark, moody riffs and various acoustics are what make this album awe-ing and listenable. Das Ende der Gezeiten will take you on a eerie and solitary path towards darkness, which will call thy name making you feel desolate and hopeless. As a reminder, Das Ende der Gezeiten is available to download for free, as well as all Araxas demos, via the myspace page. Check Araxas out.

Email ThisBlogThis!Share to TwitterShare to FacebookShare to Pinterest
Labels: Araxas