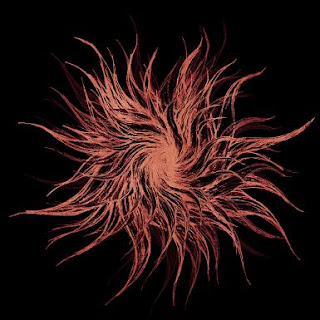 
---The Spectral Light Above and Beyond---

It all started with a Grauzeit post on facebook that brought me to this wondrous band of talents.  Also known for his work on Grauzeit and now Morphinist, Argwohn, the mastermind behind Galaktik Cancer Squad unveils his latest creation, Ghost Light. Really, it seems to good to be true but this is a one man band. Argwohn executes his compositions to a higher degree of level in all his music and Ghost Light is no different. At what had started as a progressive instrumental band, Argwohn takes the musical direction of the band and reaches new heights.  Fans of the predecessor, Celestia, will surely continue to embrace the sky-searing sounds of GCS and more.

Progression, aggression, power, speed, somber melancholic post black and rock influences and more is what you get in this new wormhole of dark matter opus.  Starting off with the turbulent sounds of Ethanol Nebula, holy hard hitting drums and killer riffage. Already on the start, the music will have you head banging to and fro.  While the riffs are pretty much aggressive one can also pin point the melancholic touches as it resonates with the sound.  A nice mixture of the two to create Ethanol Nebula which is a paramount way to start this cosmic, hard crushing, mind bending journey to the stars and beyond.  When the void whispers my name brings forth the more beautiful and softer moments of the sound of GCS but still keeping that aggressive and heavy mentality alive.  Clean guitars parts, killer tremolo picking, various tempo changes, blast beats, never really an insipid moment on this track.  The black void in the the infinite skies will even be amazed at this sound and would want to embrace it as their own.

In lichterlosen Weiten is the probably one of the best tracks I have heard in a long while from a post black band. I am not sure what goes on through the dark mind of Argwohn but the brain waves are at its peak when creating such remarkable music.  Be prepared to travel through time and space with this hard hitting flow of pulsating emotions.  Seriously this track is going to grab you and hold you till the end especially when the more angelic parts of the post rock guitars and piano come into play.  Wow, such beautiful melancholic touches that resonates through the spine and might give you the chills. Almost Awe-mazing, if you will. In lichterlosen Weiten  in my opinion, is probably the best track on this album. Some could agree and some could probably disagree.  It just depends what elements you look for in sound, whether it'd be the more heavier moments or the more somber and softer moments. In lichterlosen Weiten has both elements balanced  well so it would be a favorite for any extreme metal fan. Now take a breather... thus the journey continues.

The title track, Ghost Light, follows.   Now we are getting back to that aggressive black metal sound once again but only for a few moments as the music calms a bit with some clean guitars but then transforms yet again into a raging beast ramming into the stars of the blackened sky.  The track has a nice build up and ends nicely.  I really adore the vox on this track especially as it grows towards the end.  Once again, lots of tempo changes, fast riffing, and softer clean guitar moments as well.    And finally the epic 15+ minutes sounds of Hypnose.  Pulsating, resonating, stellar eruption!  Speed, fast riffing, the beginning will have you in a vortex once again.  And the energy, you can see it flow from right out the music and into your mind.  It's sure a destructive and raging path for one to endure. Even with the more somber parts, which will ease the mind, it's one track not to be reckon with.  The riffing will have you entranced as well!  So much power and energy was put into the making of Hypnose and you can certainly feel it with the track engulfing your brain waves in a pulsating sinusoidal manner.  What a wonderful way to end this opus with Hypnose.

Warning:  The sounds of GCS on this album may cause elliptical clouding.  I believe that was Argwohn's intent so be prepared for it.  Ghost Light will be released June 21, 2013.  You may check out Hypnotic Dirge Records for more info.