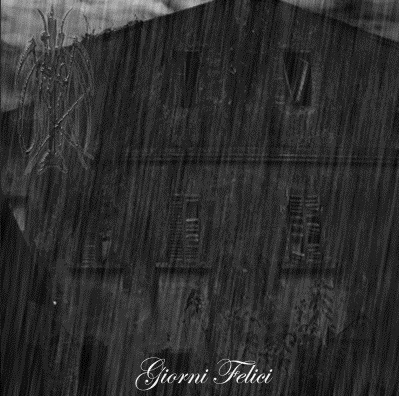 If there are any solo artists that make good quality atmospheric black metal music these days you cannot leave out this one man band hailing from Italy.  While this is my first encounter with the project, in the past they have released two other releases and a split with Gemini. Giorni Felici is the third release by member and creator Dolore.  Dolore surely has a talent as he creates atmospheric music twisting it with a hint of depressive black metal.  What I like about Dolore's music is that he elongates on his music with a nice build up of sorts.  One can expect many skilled elements from this release.  Other than the instrumental opener, the shortest song is Depression Part 1 which runs at a little bit over thirteen minutes.  There is over an hour of depressive and dismal atmospheric black metal on this release. Wow.

Going on to the music writing, Dolore's skills are tested to the max.  As previously stated he writes lengthy tracks and that itself can be a strenuous things to do.  He does prove that he can hang in there and get the job done but then again there are times where he might seem to struggle but only for a while.  I don't blame him. Hell, writing a 21+ minute track is not easy i.e. the second track Atessa. Going on to production it goes well with the music.  It's not too raw and not too clean for the atmospheric vibe that is being produced.  Synths are pretty much layered in every track as they carry a song a tune while the guitars tend to their melodic tendencies.  The synths can be a bit overbearing at times but really do good with the music. Inno Alla Sofferenza is a prime example how the two elements of guitar and synths should coexist. It builds up nicely producing atmosphere and chaos and then transforms turns into a beauty of proportions. The synths sway into a somewhat catchy yet melancholic hymn that is sure to draw you into awe but in a haunting manner. The vocals overall are intense.  Done in the dsbm way, this type of vocals draw you nearer to the pain and hatred of the already elusive music. The drums really aren't programmed too badly.  There are few spots here and there where you can tell they are not real but hey I give the guy credit for keeping the attention for most of the release especially with the long songs. All the songs have a small dosage of variety in them to its easy to tell them apart.  I am sure most will credit these tracks as one long track.  Overall the music as a whole is pretty solid.  I was embraced, consumed, and captivated by the music.

Dolore sure has the talent to create lengthy tracks and take you on a gloomy path enraged with bleak chaos while captivating you with its beauty as well.  This is a talent that is hard to endure but he prevails nicely on this release.  One can be curious how the previous releases sound or what the next release will sound like as I have been told by Dolore himself that he is currently working on a new release.  One can wonder.  If you are a fan of black metal, luring atmosphere, and don't mind some lengthy tracks, this is a release you might want to hear.